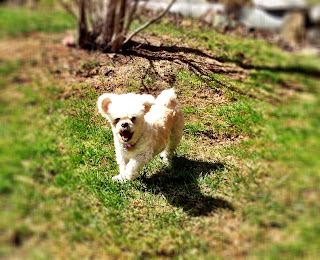 And a 29 page staff report was made for the discussion - and it said positive things, which is rare for staff reports when it comes to dogs - usually staff has historically not like dogs - so I was happy to read the report.

The report is recommending new off leash dog parks in several communities around the HRM because they have determined that the off leash dog parks we currently have are horribly over-used because too many people use them - especially Shubie Park - it is a victim of it's own success - and the Mainlands Commons Dog Park (my words) is just one big dust bowl because so many people use it that no lawn or anything can take root because of all the dogs who are forced to go there.

Currently in the HRM - as the report states, there are "seven year-round off-leash areas located in major urban parks, plus one small dedicated off-leash area for service dogs. Each major OLA has been located in a park that can support multiple recreation uses due to the park size, configuration, amenities, and environmental conditions. The size of each OLA (off leash area) varies widely, and provides variable active recreation options for dog owners. Six of the off-leash areas include walking trails of varied length, which encourages greater activity and exercise by dog owners, as opposed to those OLA’s where there are no trails and dog owners tend to engage in more passive use. Some parks have limited hours of use for all or part of the OLA. Two of the off-leash areas are supplemented by seasonal off-leash sports fields.

There are also 28 sports fields designated for seasonal (timed summer and/or winter) off-leash use.
Seasonal OLAs are established on sports fields that are not scheduled in the off-season, or on fields that are underused at certain hours of the day in the playing season. The fields supplement the primary network of permanent OLAs and are limited in the level of service they can provide.  All of these off-leash areas have generally been well received and attract hundreds of people each week from communities across HRM. Some of the parks serve as major regional destinations for dog owners and experience heavy or even excessive use at peak times."

So that is the sum total of current space that is legal off leash space for the dog owners of the HRM - except of course for us wily dog owners who have been able to figure out where crown land is within the HRM of course - and those of us who know are usually not willing to divulge those secrets (snicker).

I have to mention here about the Calgary model - which everyone always flouts whenever any dog subject comes up.  They have ONE HUNDRED AND FIFTY off leash dog spaces within their city - a fact that they brag is probably unlike any other city in North America and they are pretty proud of that fact and they should be.

They know that when you give dog owners access to legal spaces - they are probably not going to break the law - like we do here in the HRM and basically take our dogs off leash illegally all over Long Lake Provincial Park, the Halifax Commons, and tons of other spaces.

So I bet it's killing you where city staffer's are suggesting to make the new dog parks?

"Spryfield Area- The Province has approached HRM with an offer to place some crown land in the
area of Long Lake Provincial Park under HRM control for the purpose of establishing an OLA. This
would assist the province in controlling the ongoing problem of dogs being off-leash which is a
prohibited activity in provincial parks. This offer presents an excellent opportunity to address both
provincial and municipal needs and should be carefully considered. If deemed appropriate, the goal
would be to manage that portion of crown land as a municipal park where off-leash activity is
permitted.

Cole Harbour - the former Rehabilitation Centre lands on Bissett Road are the subject of the HRM
Cole Harbour Basin Open Space Plan, and it is appropriate to consider an OLA on some portion of
the site.

Eastern Passage – The Eastern Passage Common on Caldwell Road offers an option that can be
considered for that community, although other appropriate sites may also exist. This would need to
be considered as part of an overall Eastern Passage Common Master Plan, which had been deferred
pending completion of the new school. Alternatively, approximately 1.5 km away there is a largely
undeveloped 20+ acre park parcel at the intersection of Caldwell Road and Hines Road, adjacent to
the Trans Canada Trail, that may be suitable for use as an OLA given the lack of nearby residential
land uses.

Dartmouth – Shubie Park is a major OLA area with a regional draw that may be operating beyond its
capacity. There is also an OLA on the Dartmouth Common; however, it has limited capacity and
serves a small area. To overcome these challenges, a dedicated OLA should be provided, and
consideration given to providing an additional off-leash area with lake access. There are existing
municipal parks in Burnside Business Park that could be appropriate for development of a dedicated
off-leash area."

So this is very pie in the sky talking from the city - we dog owners have been dealing with the city now for a very long time when it comes to off leash exercise and our dogs - we have watched them close - at the time - the only completely fenced in dog park - Robert Park Drive Dog Park - because one person complained to the city, and we watched the city threaten dog owners over and over and over - and even threaten to close Point Pleasant Park to dogs over poop issues - so we have very little good will built up with the city when it comes to city staff - and we pay (very high) taxes - the same as every other user of city services.

This staff report released today is a very good sign (hopefully) of things to come - and we can only hope that it doesn't die - and the way that it won't die is if dog owners stay noisy.