When is a rescue group a "rescue" and when is it a "for profit" business?

Looking at Wikipedia - they define an animal rescue thusly:


An animal rescue group or animal rescue organization is dedicated to pet adoption. These groups take unwanted, abandoned, abused, or stray pets and attempt to find suitable homes for them. Many rescue groups are created by and run by volunteers, who take the animals into their homes and care for them — including training, playing, handling medical issues, and solving behavior problems — until a suitable permanent home can be found.

I would add a lot more things to this definition -
- they usually use foster homes instead of having a physical shelter - or one place like an outdoor shed that sometimes does not have adequate physical amenities
- when they take on a dog or a puppy, if that animal presents with physical ailments - they deal with and pay for those problems before the dog is adopted out - they don't just euthanize the animal - unless it's a terminal condition
- the cost of the spay neuter is included in the cost of the adoption donation
- responsible rescues will not adopt out dog to homes that have unaltered animals in the home
- every animal is micro-chipped before it leaves the rescue
- when they take in puppies they have the adopter sign a contract that the dog will be neutered at 6 months and then follow up and if that dog has not been altered - they seize the dog
- they do home visits before adoption
- they guarantee a dog for life - if at any point in the dogs life the dog has to be returned - for any reason - the dog can go nowhere but back to that rescue

I say all this because there is at least one local dog broker in Nova Scotia who is trying to present themselves as a "rescue" - and has aligned themselves with what everyone considers to be an upstanding local rescue to rehome a dog.

What this business does is take all the puppies from an owner and then spay the Mom and leave the Mom behind - they then take the puppies to their property and keep the puppies in a shed until they are all "adopted" out.

They don't do home checks, they don't guarantee for life, they don't have volunteers - it's all paid staff - they charge $350 for each puppy - it is a for profit organization.

They've been in business for a couple years - and for the first time for whatever reason - they've come into contact with an adult dog that needs to be rehomed and they've felt that they can't do it themselves - the dog may be pregnant - they don't know because they haven't spent the money to take her to the vet to get any pre-natal care - she just may be going into heat.

I am taking severe umbrage to the local good reputation rescue saying that this for profit organization should be taken seriously - they are one step away from being Gail Benoit - they are giving respectability where it definitely should not be.

It is cheapening them by being associated with them.

I have been fighting against back yard breeders, dog brokers, and puppy millers for more than 10 years and I'm not going to stop just because someone says it makes things look bad - you should not buy your next dog or puppy from someone who is selling the puppy for profit - even respected dog breeders don't sell for profit - they make no money from their puppies because of all the expenses they've incurred testing their dogs for defects, going to dog shows to champion their dog - they do it solely for the love of the dog - the only good place to get your next puppy is from a respectable rescue or from a respectable breeder - not a dog broker - and this is what this place is - and shall I tell you their name? They are called "Oops Puppies". I hesitate to give their name because that only gives them free advertising.

Do not buy a puppy from them - they are a dog broker - nothing better than any dog broker who's been on the news in the last few years. The second they get an adult dog that they don't think they can make any money off of - they run to a real rescue. For shame.
Posted by Joan Sinden at Wednesday, February 05, 2014 20 comments:

What types of ways, and under what types of circumstances - is it okay to kill your sentient property in Nova Scotia? 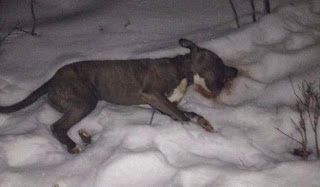 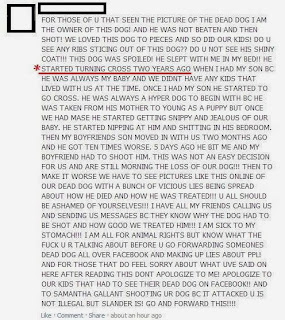 A dog owner was caught shooting their dog in the head and dumping the body in the woods yesterday - apparently the dog had been disobedient the last 2 years - nipping at the owner since their baby had been born - and in the last week had acted out and actually bit the woman of the couple - so the husband decided to shoot the dog in the head to get rid of the dog - and instead of disposing of the body in a way that other normal people would do - taking him to a vet to have them deal with it and pay a fee, bury it on their property, have the remains cremated, etc., - they decided to bury it in a wooded area where he was quickly discovered by some people who thought some horrible cruelty had taken place - which is only a natural thing for people to think.

It quickly spread through facebook like wildfire - and then the owners themselves posted to facebook with their own version of what happened - outraged that anyone would be pissed off with what they'd done.

And then today we find out that the RCMP and SPCA are not going to file any kind of charges because the dog had not suffered any obvious pain when it had been shot in the head. 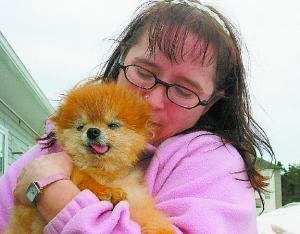 It brings to mind the case from New Brunswick - a man by the name of Keith Burton was unhappy that the NB SPCA was going to seize his breeder pomeranian dogs - so instead of them seizing them he went into his shed and bashed them all in the head in order to kill them. He ended up only being convicted of one count of cruelty because only one of them lived - he only caused one dog pain - you really can do anything you want to your animals - even in this day and age.

I think anyone who is sane would say no! That is all cruelty - so why is this couple not being charged with anything? Even degradation of a body.

It makes me think of all the animals who are suffering right now that we know nothing about - if they were willing to end this dogs life so easily - what were his last 2 years like. I'd be willing to bet they were not pleasant.

And what else are they capable of. A lot - I really hope they don't get any more pets. And why isn't the SPCA or RCMP tryiing to do anything about that - this couple may have already gone out and gotten a new pet that may get a bullet in the head tomorrow - that really makes me shudder.

And the biggest question - is there any other pets in the home right now that are in danger?
Posted by Joan Sinden at Monday, February 03, 2014 4 comments: