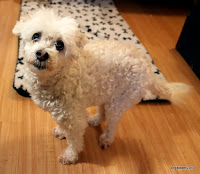 Can you believe this dog is 19 years old? I am so lucky to still have her around to bring in the year 2014. I am so blessed that she is still so perfect. 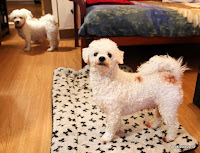 Poor Sidney has awful allergies, but he's still a happy dog and loves it when people come to visit 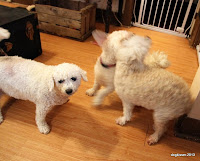 The dogs all love to wrestle 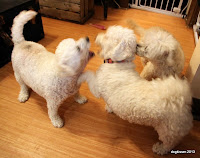 Here Sassy is giving the gears to the rest of them 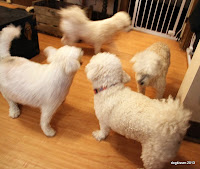 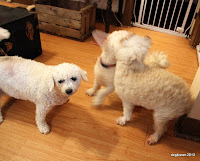 But mostly it's just Buttercup and Bubby who do the wrestling

Here's a cute shot of Bubby coming towards Sidney 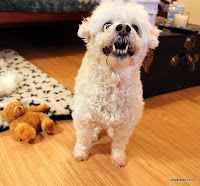 She is so playful!

This is Bubby looking perfect, as usual 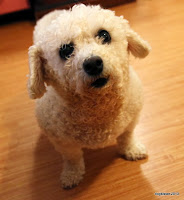 Here is a shot of Sassy - also looking perfect! 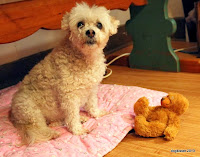 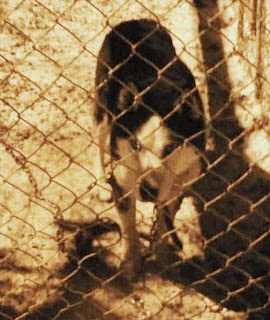 I want to tell the story of Buddy the dog because his whole story hasn't been told anywhere. From the beginning to the dirty end.

The first seven years were entirely unremarkable except for the fact that he was tied to a dog house the entire time and only one person cared about him that time - and that person was not his owner. It was a man who came to feed and water him because he knew that his owner didn't feed him regularly - for whatever reason, his owner did not - so he took it on himself.

For seven years it didn't matter the weather he got up every morning and went and fed a dog that wasn't his own. He's a quiet, gentle man and he didn't make a fuss about it. He just knew it was the right thing to do and he did it. And Buddy stayed alive all this time.

This summer a relative of this man had had enough and she contacted the SPCA and I don't know if they sent someone there themselves - or more probably - they sent an RCMP officer out - but because he had food, water and shelter - they said there was nothing they could do - and she started googling tethered dogs and she found me. That was August. 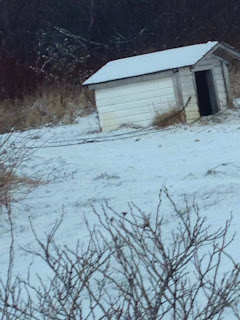 I told her that in order for anything to happen her relative had to remove the food for a couple days - and the the SPCA would do something - because if the owners were not feeding the dog, that is cruelty - and the dog would be seized - but she said there was no way the cousin would do that - he couldn't in good conscience dog that - and I said there wasn't much we could do - I could send the owner a letter asking if they'd surrender the dog to me -

Meanwhile Buddy continued his vigil tied to his dog house.

In November the man's relative contacted me again to give me the address of the dog so that I could send out the letter - and she said that she had contacted the SPCA again. The SPCA was upset to hear that the dog had not been moved to the daughter's house - at this point in November Buddy was living at an address no one was living at - he was living at an abandoned house - his ownwer had moved in with his daughter - so not only was he not being fed by his owner - his owner was not even living there anymore!

I guess the SPCA had made contact with the owner when my contact had originally contacted them - but had never followed up on it - but they assured us they were re-opening the file. This is now December 11th.

On December 12th I made contact with the owner's daughter on Facebook - asking her if she'd be willing to sell Buddy to me for $200 - this is a common tactic in rescue when all other avenues have been exhausted in surrendering a dog - offering money for the dog - it's a last ditch effort - and through an intermediary on the evening of December 12th she refused the money - I never did talk to the owner's daughter directly.

So we waited with baited breath to see what was going to happen.

And the next email I get is that there was food and water at the dog house - so there was nothing that could be done - the RCMP officer had walked away - and that Buddy had bit the officer. Case closed. Buddy was staying where he was.

But then I had other news - the daughter had accepted the $200 and we could have Buddy. Nancy Noel at the SPCA had negotiated with the owner's daughter to give us the dog - and she was turning Buddy over to our rescue - which was the best news of all.

They had to sedate him to have a vet look at him because he was attempting to bite them so much -he'd never been handled in life before - and when they did, they found a large cancerous tumour down by his penis - it had ruptured and it was very obvious that he'd been a lot of pain for a long time.

Any dog who was a normal dog owner would have noticed it a long time ago - who hasn't scratched their dogs belly? Even dogs that are put outside sometimes? But this dog had never received any love so it was never noticed. So the kindest thing to do was to just let him go. And that's what they did.

So that's the sad 7 year life of Buddy.


Is that cruelty, is that negligence, was that a good life - a life that never once received a kind human hand from his owners - even in death? That someone had to pay the owners $200 in order to give their dog a humane death?

Conditions for dogs need to change in this province.


Just because dogs have food, water, and shelter - it's not enough - people who have the power to seize dogs need to have more power to seize - and USE THOSE POWERS - even to seize temporarily to have the dog examined - and then return the dog if he's not actually in distress. Let an external vet make the decision - not the RCMP officer or the SPCA officer - obviously they are doing a really shitty job at the moment.

Don't let Buddy die in vain, because there are SO many more Buddy's out there.

A Call to action for Buddy 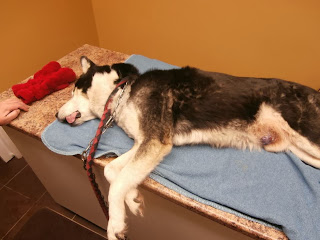 His name was Buddy. He was a husky mix and today he is dead. He had a large cancerous tumour on his belly that the vet who saw him figured was inoperable, and he bit several people who were trying to help him - so he was euthanized last night - a couple hours after he was rescued. 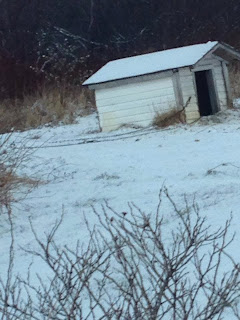 He had been chained out his whole life - this picture was taken of him yesterday - he had become so withdrawn that when a kind person came to visit him he wouldn't even come out of his dog house.

He lived his life completely alone. His owner had moved away from the house he was living in - moved in with his daughter - so he didn't have anyone living with him at all - no one feeding him or giving him water - kind strangers did that. One man came everyday and fed him for 7 years, no matter what the weather. His owners never did that for him. 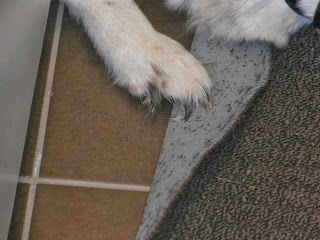 The RCMP were called and would come to visit - even yesterday they came - and they could do nothing because Buddy had food, water and shelter. Even though no one was living at the residence, even though underneath his husky fur he was thin - even though his nails were overgrown, even though yesterday he bit the RCMP officer - they could not seize Buddy.

He never experienced what it was like to live inside, to have a dog bed, to eat in a kitchen, to lay on a couch, to hear a kind word, to be inside from the weather.

To have someone care enough to check to see whether he's sick or in pain.

This is a dog in Nova Scotia, Canada under our current legislation.

We need to start holding our legislators to what they say.