PET Projects down in Shelburne are working hard to get anti-tethering legislation onto the agenda at their municipal level as well as the provincial level. I think that's fabulous.

They've set up a survey at http://www.surveymonkey.com/s/LCFZ893 that they want people to go and fill out to give hard statistics to the bureaucrats they're talking to - so take a minute and go fill out the survey.

There was also an article about them in today's Chronicle Herald - I think if anybody can get movement on this issue - it'll be ladies and gentlemen of PET Projects - so it's exciting to watch it happen.

Group seeks legal help for dogs at end of their tether

They want an anti-tethering regulation that would make it a crime to keep a dog at the end of a rope or in an enclosure for lengthy periods of time, after dark and during weather extremes.

There’s no clear legislation requiring an animal to be untied at the end of the day and brought indoors, said Debbie Harvey of Shelburne.

"It’s not illegal to chain a dog continuously in Nova Scotia," said Harvey, a member of Pet Projects, a Shelburne County organization trying to introduce anti-tethering regulations at the municipal level.

But Pet Projects has been asked by council for more input about anti-tethering, said Harvey.

"We want change in the laws and legislation," she said.

In the Annapolis Valley, animal welfare advocates met this month with Kings West MLA Leo Glavine to ask him to consider their position.

"We’re looking at the Animal Protection Act and . . . possible ways for amendments to be made," said Scott Saunders.

"We’re at the very preliminary stages of this. As it stands right now, if a dog has food and water and shelter, that suffices.

"But we’ve got dogs that are spending their entire lives strapped out to a tree or to a doorstep. I think that’s really emotionally and psychologically damaging to that animal."

They’re like misfits who have not learned how to behave properly around others.

"They also develop something that we call restraint frustration. It’s an anxiety," Jay said from her home near Truro.

Dogs are frustrated because a tether prevents them from doing what they want to do. That frustration, sooner or later, will switch over to aggression, she said.

A dog in an outdoor enclosure is in a similar situation. Dogs that are tied outside but exposed to a lot of stimulation can never rest, and that can create barking and lunging, Jay said.

"It’s really important to a dog that he belongs so that he has . . . social acceptance with the group he lives with. That’s crucial."

Jay wrote a book, Dump Dog, about her rescue of a feral dog and the animal’s journey from being wild to becoming a companion dog. Jay’s website, voice4dogs.com, has more information.
Posted by Joan Sinden at Wednesday, February 15, 2012 1 comment:

A Pekinese has won best in show at Westminster in 2012 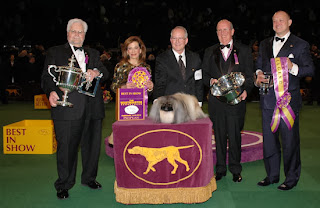 So once again a pekinese - "Ch Palacegarden Malachy" a.k.a. "Malachy" - has won best in show at Westminster - which says to me that breed clubs really are just interested in looks and breed standards and the perfection of an animal as it's written in a standard and not necessarily anything that's got to do with dogs living in homes and having happy, healthy, lives.

I couldn't imagine having a dog who's eyeballs could pop out any any moment and could become overheated and had to sit on ice packs, and who's nose was positioned so far back into his skull that his face was inverted. 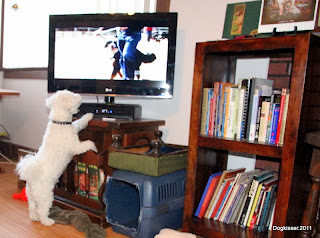 Whenever a dog comes on the television - Bubby will run over and bark like crazy at the television - and I've watching the television show - "Dogs that Changed the World" and they had quite a long section on Pekinese dogs - and Bubby looked at the tv and didn't bat an eye - he did not recognize those things running around on the screen as being dogs and something worthy to be barked at. It really struck me that even dogs can tell when we humans have gone too far.
Posted by Joan Sinden at Wednesday, February 15, 2012 2 comments:

Email ThisBlogThis!Share to TwitterShare to FacebookShare to Pinterest
Labels: Bubby
Newer Posts Older Posts Home
Subscribe to: Posts (Atom)
If you believe in the work that I do here and enjoy the posts on this website it would be awesome if you wanted to donate to support the work I do with all of my websites.
You can send me your donation via Paypal - just click on the Paypal button below and follow the instructions.
Thanks!!