After being together for 4,446 days I have lost Buttercup.  She was the love of my life. 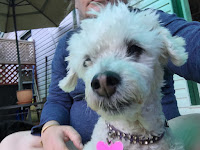 Every night when we slept she was by my head.  She was my constant companion.  When I had anxiety she calmed me down. When I was sad she made me happy. 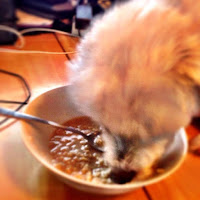 When I needed warmth she snuggled up next to me.

When I needed protection she put her body in front of my face.

It is so unfortunate that when I got Buttercup from the SPCA she was already a senior. The vet thought she was about 9 years old, and that was in August 2003.  As the years went on though she seemed to get younger as time went on. 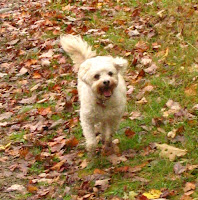 She could go anywhere and do anything - climb any rock, and keep up with the big dogs Charlie and Daisy - we went somewhere everyday off leash for at least an hour - a new adventure every day 365 days a year, we had such a great life.  That went on for years - I took her shopping with me, we had so may fun times.

But then everyone started to get older, Buttercup's knees started to give out - and she spent most of her time on my Dad's lap, but that was okay - she had new job - taking care of my Dad.  And he loved her so much - she'd stay on his bed when they had a nap - he loved her as much as I loved her - that went on for about 4 years. She made him so happy.

And in 2012 my Dad died.  And Buttercup took on a new job - one that she didn't like at all - hanging from the jowels of all the foster dogs that started coming through the house - almost 40 dogs moved through the house from 2012 to now - and she hated every one of them, and tried to kill all of them.  And we are very lucky that not one of them tried to kill her - it's a testament to the fact that former chained dogs tend not to be dog aggressive. 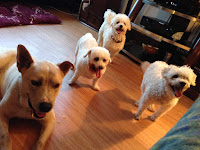 She had a heart murmur, low thyroid, her knees weren't in their sockets at all, they were just floating in them, she was 5 pounds less than she was at the height of her life - but still she walked as far as I asked her to, she went outside to use the washroom, and she did whatever she wanted - right up until her 21st birthday this past August.

But even in August, I could tell that she wasn't feeling well, I knew the end was coming but I just couldn't handle it. 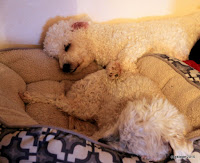 And today the end came.  Now I have to live my life without her smacking my leg at 7pm to tell me that it's time to go out to the kitchen to get some liver.  There is no boss of this crew anymore.  I am alone, even though I still have 5 dogs left in the room with me.

I am without my Buttercup.The animal I would pick up and press to my neck and give kisses to and hope that everything would be okay in the world, now I have no reassurances at all. I have no little dog to lay on my head to dissapate the thoughts that swirled in my head. 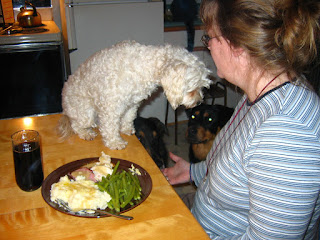 Buttercup made me feel special.  I was so lucky to have her, I didn't deserve her, but I had her and she was mine. And now she's gone. And I am no longer special.  I don't know what I'm going to do without her. Now I am just me, and I am no one.
Posted by Joan Sinden at Monday, October 19, 2015 9 comments: