What does the Animal Protection Act Actually Say?

So let's look at what the Animal Protection Act.

That's the legislation they are supposed to be following.

Distress is mentioned no less than 26 times in that Act. And the first time it's mentioned is in section 2 where it says -

(2) An animal is in distress, for the purpose of this Act, where the animal is

(a) in need of adequate care, food, water or shelter or in need of reasonable protection from injurious heat or cold; or

(b) injured, sick, in pain, or suffering undue hardship, privation or neglect.

So if a dog is freezing to death, about to expire from heat, injured, sick, in pain, suffering undue hardship - privation - or neglect - the NS SPCA should be able to do something about it.

That should go ABOVE just things like having water, food, and shelter don't you think?

Anyone with half a brain would believe that.

It's my belief - and why I'm personally so angry - is that the NS SPCA is INTERPRETING the Act in a way that they want to interpret it - so that they don't have to do anything - so that they can say that if an animal has food, water and shelter - they can't do anything. Not because the ACT says so.

That is my belief.

The NS SPCA has said they will only pursue a case if they have a 100% chance of conviction - so what does that mean? That means that they pursue almost no cases. That means they leave a lot of animals behind. And that is wrong - simply because they say they don't have the money to pursue cases that they won't win.

In 2012 the NS SPCA only pursued FIVE cases of cruelty - and received their 100% conviction rate - but they received 18,000 calls regarding cruelty!!!! That is quite a disparity!

Who's fault is that? It's not the animal that's left behind, that's for sure.

Go read the Animal Protection Act and see if you think that the NS SPCA are enforcing it. They are the only organization currently empowered in Nova Scotia to do so.

Then go read the NS SPCA's Standards of Care - written by them specifically - why would they write such a thing that they can't enforce one little bit of? It's entirely baffling. And their "Doghouse Location and Care requirements" - why do they walk away from such horrific situations when they've written such a document. I do not understand it.
Posted by Joan Sinden at Saturday, January 04, 2014 26 comments:

Yesterday I made a venom filled post about the NS SPCA and I wanted to narrow it down a little bit - my beef isn't with the NS SPCA as a whole - over the years I've written a lot of posts about the Nova Scotia SPCA and I've always made a distinction between the talking heads and the administrations of the SPCA and the branches across the province - the people who do the actual work of the humane organization.

I have said it before over the years, and I always will.

I just wanted to make that clear. I know that I can't walk into a branch because I am disliked so immensely for the things that I write - but I still wanted to put that out there - it's not them I'm targetting - it's the people at the top that need to have their policies looked at, and their interpretations of the Act questioned. Not the workers.
Posted by Joan Sinden at Friday, January 03, 2014 4 comments: 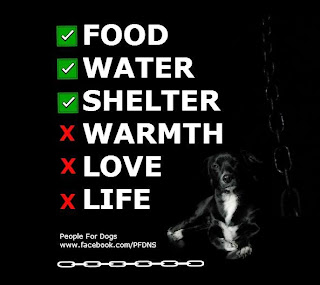 A dog was found frozen to death inside a kennel in Preston two days before Christmas - December 23rd.

Her body had already gone into rigor mortis. The SPCA had to get inside the kennel with an ice pick to remove her body from the kennel it was frozen so hard inside.

That's how long she'd laid there unattended and alone with no notice from her owners.

Those are the "facts".

To say that that dog did not die in a state of distress and neglect - however she died - is such utter bullshit - in today's world - would just blow anybody's mind - no matter who you are.

And yet the Nova Scotia SPCA is saying just that.

They are quoted - and on videotape on CTV news as saying "Based on the evidence that is factual, we will be going forward and our first priority would be to talk to the people that were responsible for the care of this animal and from that point, depending on what they say and the evidence we have, we may or may not proceed with charges,”

They also say in a Chronicle Herald article published today -

“We are very sad,” he said, (David Ross, chief inspector with the SPCA) adding that unfortunately these calls come in often from around the province."

He goes on to say - "Unfortunately, we deal with a lot of this. Every day we're out, we’re dealing with these."

What does he mean when he says these things?

That' he's dealing with dead dogs everyday? That everyday, they deal with a lot of "this" - what is "this?" Dead dogs?

If that's the case - we have a problem here.

I went on Global TV news tonight and I said something that I think a lot of people are thinking - I said that I think that the NS SPCA should have their powers to enforce the Animal Cruelty Act in Nova Scotia be revoked IMMEDIATELY - taken away - and given to some other organization - obviously they do not care about animals in distress whatsoever - they are willing to walk away from dogs in distress - they are willing to let dogs die on a daily basis - based on what we have learned today.

THIS CAN NOT CONTINUE!

This is a call to arms - the Nova Scotia SPCA cannot be allowed to continue to sit in their their office and let dogs die!

May I say again what I said at the beginning of this blog post? That is utter bullshit. Please excuse my french - but strong words are needed here - someone must be held accountable - and right now - it's the Nova Scotia SPCA. 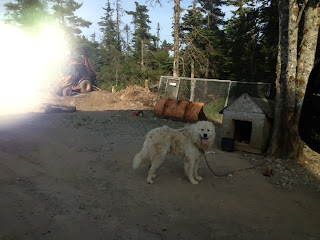 Bullet has been walked away too many times by the NS SPCA - the last time just a couple weeks ago - the only difference between this photo taken last summer and now is that instead of him being tied to this dog house he's now inside that kennel you see in the background - so he's not chained - he's now penned - that's the only difference - he's still outside - but according to the SPCA - his circumstances are much better than they were before. 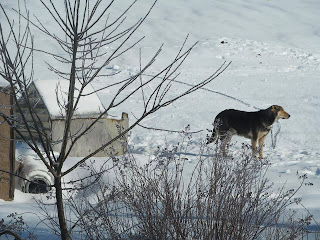 This is a dog that has been called on numerous times to the SPCA - but is still on his chain - tonight he's still outside - the only complaint the SPCA has about him is that his dog house is a bit too small, so the owner has agreed to build a bigger one - in the spring - the latest complaint to the SPCA - the Constable wasn't even willing to go visit the dog - they said they would TELEPHONE the owner. What kind of cruelty enforcement is that? 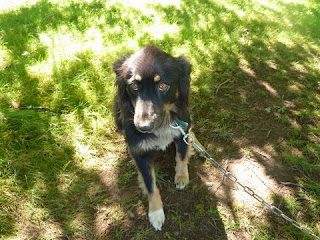 We don't know where this poor girl is tonight - 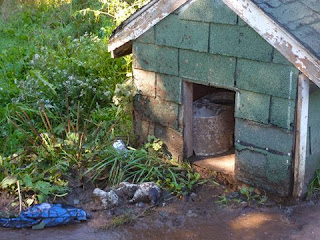 but this was her doghouse - her owners refused all forms of intervention - and then they moved - and we can't find them now - the SPCA didn't think there was anything wrong with their setup so nothing was done by them to intervene - and now she is lost to us. I hope she is safe and inside tonight. 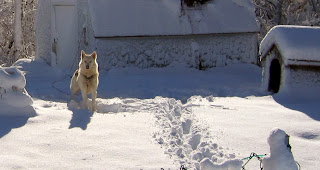 This dog lived and died outside on his chain - never had a chance - simply because of his breed - right here inside the HRM
Posted by Joan Sinden at Thursday, January 02, 2014 29 comments: