Meeting a sloth is not a good thing! 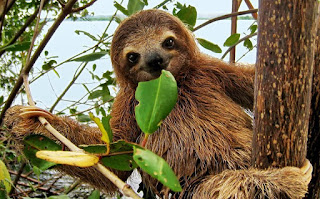 I have to say that I was pretty horrified yesterday to see it pop up on my timeline in facebook the headline "Meet a sloth! Halifax - Diversity of Living Things" Hosted by Little Ray's Reptile Zoo - so I clicked on the link - which I am not going to provide because I don't want to give them any extra publicity for their event - and when I went to it I saw that indeed - they actually had a live sloth that they were pimping out that they called "an educational animal" that they had acquired - they said from a captive bred facility in the United States just so that they could show people how fabulous these animals were.  They said "leaving wild animals in the wild are one of the main messages at their events".

When I dug deeper to find out more about "Little Ray's Reptile Zoo" it would seem that there are several franchises of this organization and there are zoo's in Ottawa, Hamilton, Nova Scotia, and there is a page for "United States" - but all it says on that page is that they are "expanding" and that if you want to book an exhibit to contact their Ottawa location.  It also lists a Newfoundland location - but when you click on that page - it comes up as page not found.

For the Nova Scotia page - it lists Lisa and David Janes as being the owner of that franchise - who own "Blue Nose Reptiles".

I have no doubt that the Janes are committed reptile rescuer's and have a great love for the animals that they are committed to - but there are some species that do not belong to roving pet shows - and sloths and their type are one of them.

Looking at Little Ray's facebook page it appears that the sloth - and I can't see anywhere that they've said what this sloth's name is - has shared ownership between the different franchises - and I only went back to the beginning of October - and since that time has been part of TWENTY FIVE - educational days around Ontario, New Brunswick and PEI.  That is a shit-load of public appearances I have to say.

This poor animal is a huge money maker for these franchises - so I can understand if pointing out this fact is going to get some blow back from this money making "educational group".

You may ask - why do I have a problem with this?

The problem I have with this is that sloths are very beautiful and when people see wild animals like this up close a lot of people are going to go "OH MY GOD - this animal is so cute - I WANT ONE."

And then what's going to happen?  These captive bred organizations who are only breeding for these "educational facilitys" are going to start breeding for pet populations.

There is a huge demand down in the States for cute little monkey's - and guess what - people are able to buy them from people who breeding them in captive bred facility's - remember Darwin in Toronto who was found outside the Ikea in Toronto?  I wonder where he came from?

If there is a need for something - someone is going to provide it.

NO ONE needs to see a live sloth - you can see all the ones you need on the internet.  PERIOD.

Please do not give any money to Little Ray's Reptile Zoo with their live baby sloth.

Please.  You are giving them blood money - what will they show you next if this is a success?

I can only guess.
Posted by Joan Sinden at Wednesday, December 06, 2017