Nova Scotia bans the declawing of cats in January 2018

Some people who don't live here may think that we are a backwards society since we seem to be living on the edge of North America - physically we almost seem to be like a big mole hanging off the continent - but in reality when it comes to some things we are a lot more advanced than almost any other place.

And one of those things - especially in the last 10 years - is animal advocacy.

In the last ten years Nova Scotia has become a "no kill" province, we have no pet stores that sell puppies or kittens, we banned the continuous tethering of dogs in 2014, in 2009 we banned the cropping and docking of dogs, and just this month the Nova Scotia Veterinary Medical Association disallowed it's members to perform the elective declawing of cats.  We are the first province or state in North America to do this and that's amazing.

There are some municipal governments in California and a couple other places who have banned it - but it's only cities - no large area like us has done this.

Dog people are crazy - but there is definitely something to be said for cat people - and a lot of this advocacy was done by the Tuxedo Party of Canada Cat Welfare Society who have been unwavering over their years in their hard work with feral cats, tnr and the declawing issues. 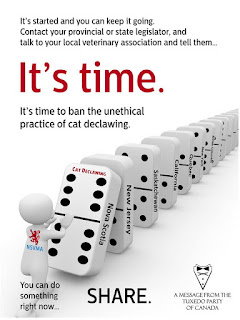 Now they are moving to take this issue Canada wide and I hope they succeed - if we did this to humans it would have been outlawed decades ago because it is just that barbaric.
Posted by Joan Sinden at Monday, December 18, 2017