Fun Stuff to do coming up 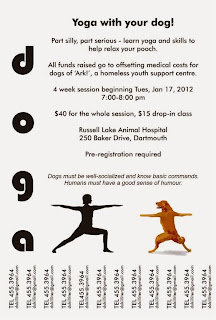 Here's a first (that I've heard of) locally, that I have always thought was a good idea - Yoga with your dog! Yay! A Yoga instructor who does stuff with local lab rescue has started a "DOGA" class - we've missed the first class - but you can do a drop in for the remaining classes - which are being held at the Russell Lake Animal Hospital - information is on the photo to the left - click on it to learn more - it costs $15 per class - sounds like a ton of fun 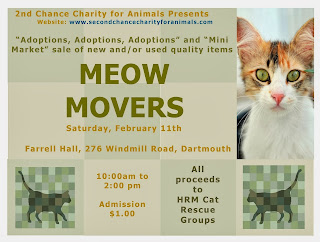 2nd Chance Charity for Animals has moved on to the next level with their meow mixers - they have been having huge flea markets where local cat rescues can make extra money - and now, on Saturday February 11th they're hosting local cat rescues to have a super adoption day at 276 Windmil Road - Farrell Hall - the site of their previous successful yard sales.

Several local cat rescues will be showcasing the kittens and cats they have for adoption - as well as selling some new and used quality items.

It is fabulous that finally the local cat rescue community is working together to highlight kittens and cats that need to be adopted. 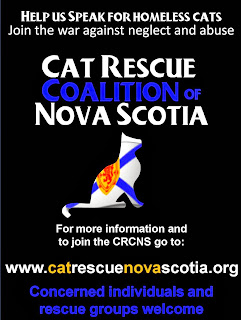 In that vein - the Cat Rescue Coalition of Nova Scotia has started a recruiting drive - they're calling it "1000 voices" - they're looking for 1,000 people to sign up - "they believe they need to speak in one voice to get the attention of municipal and provincial governments and other organizations. The CRCNS site can be a living petition against the neglect and abuse of cats in our community"

Go to their website at http://catrescuers.ning.com/ - and sign up if you care about cats in Nova Scotia 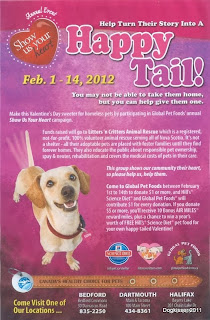 Global Pet Stores continues on with their philanthropic supremecy and is holding their 5th annual "Show us your heart" fundraising campaign - and this year they're raising money for local rescue Litters n Critters.

Since 2005 Global Pets has made over 250,000 for homeless pets with this campaign so that's pretty awesome - I know that whenever I go to any function - Global has always donated some item - so they are very generous to local rescue - which is just one of the many reasons to spend money at their stores!

Lastly - don't forget about the annual GPAC Doggie Expo 2012 that's coming up in February - keep your Sunday February 19, 2012 open from 10am to 3pm - the event is being held once again at the Halifax Forum - the day is always packed to the rafters with people and dogs with tons of great stuff to buy - it's a highlight of the year!
Posted by Joan Sinden at Thursday, January 26, 2012

Email ThisBlogThis!Share to TwitterShare to FacebookShare to Pinterest
Labels: stuff to do coming up