Frank Magazine is obviously written by a bunch of dog haters 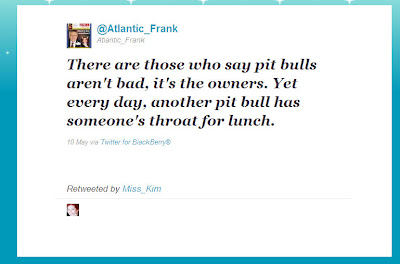 Today I spent my last hard earned cash on a Frank Magazine.

For those of you from away - it is a local "scandal" newspaper that tries to titillate the local political and social scene with stories of intrigue and insider scoops about local politicians and what drunk driving convictions their children are currently up on charges for and illicit silliness like that - along with posting the salaries of government officials and saying who owns the most expensive house in Nova Scotia.

Really important stuff. They also like to throw in the occasional dog story to keep us dog people happy - and they like to pick on Francesca Rogier to make everyone especially happy - their dog stories have seemed though to have an undercurrent of malevolence that I never really understood - but I think now know why - and it is written very clearly on page 29 of the current issue with their regular feature "Tweets of the Week" when they wrote on May 10th -


"There are those who say pit bulls aren't bad, it's the owners. Yet every day, another pit bull has someone's throat for lunch".

When I saw that, I was horrified.

A local publication being so glaringly dog hating, disrespectful to every dog in our province - I could not believe it.

I immediately wrote to the paper to a contact I've emailed back and forth with a few times asking for an explanation - and all I got back was "I had absolutely nothing to do with that. Tweeting is outside of my realm...I neither agree nor disagree; I haven't read enough or done enough research to understand the entire situation;"

"when was the last time that you heard or read of someone's throat being lunch for a pit bull in Nova Scotia? How common of an occurrence is that?

What bullshit is that? I know that you are a salacious rag - but a malicious, hate mongering trash piece of shit?"

And that was the only thing they replied with "haven't read or done enough research to understand the entire situation".

For a major local newspaper to write such incendiary hateful pap about a dog breed that is on the edge of extinction in the province at this current moment is SO irresponsible it is almost unforgiveable.

Does Frank Magazine has a dog hating agenda? Do they want pit bulls banned in Nova Scotia like the Union of Nova Scotia Municipalities does? Maybe they do - I guess now we know - and for that - they have lost $5.49 every two weeks from one reader, that's for sure - and I hope they have lost a lot more than that.