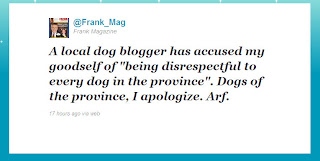 I couldn't have expected any less, really.

Someone posted to Facebook that the original tweet has been taken down, which is at least one good thing.

"WTF how to add to the hysteria the media has already engaged in over a subject most of them are very uneducated in, or interested in learning about, which annoys me to no end. In dealing with several dog bites last week, they weren’t going to be headline or controversial enough to sell papers so no one was interested in because.. come on a droopy eyed tired lonely old beagle bites enough that the person needs stitches, or the 12 pound wee rat bastard terrier that everyone would do the “ahhh how cute” with its razor sharp teeth causes puncture not big deal, of course if we called it a 12 pound pit bull then whoa….here come the troops.

Personally a dog bite is a dog bite, and we as responsible pet owners have a duty to keep the public and our companion animals safe and informed. So if the dog is a husky, shep, lab, yorkie, aussie, Puli or a Chinese crested …a bite is a bite, a dog is a dog, and should be assessed accordingly

Ignorance is a sad excuse for an opinion."