Even if it's spelled cute like caboose, it's still abuse 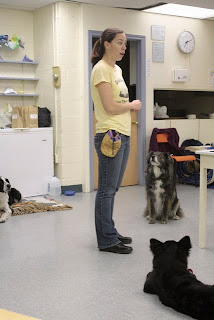 There are all different ways you can train your dog, just like there are all different ways you can bring up your children - and no one can dictate how you do it - it's completely up to you. But there are some actions that you can do - and say that you're doing it "for the good of the dog" - for for the "good of the child" - and you are actually breaking the law. And that is when you are abusing the dog or the child. That is when you are crossing a line that society has determined is no longer just aversive, but is actually hurtful, will have lasting painful effects, and causes injuries.

This is a very serious topic, and it's got to be dealt with that way - and it's become even more serious this week for a couple of reasons which I'll be telling you shortly.

The first one is a local reason. "Petworks Veterinary Hospital and Resort" over in Dartmouth used to use Rob Van Tassel to run their "Puppy and Obedience Classes". Rob is a super duper positive trainer who uses clicker and positive methods to train his dogs and has super-star dogs of his own that are masters at agility and are dogs that are absolutely lovely. But he's become too busy with his own business to run the classes there - so they have recently hired a new person - who is also employed with a company called "Unleashed Potential" - which is a company out of PEI - which very proudly has videos on their website that promote the use of "electronic collars" - or what you'd also call "shock collars" - and they make no apologies for that. They say they "are a results based dog training service. Their Goal is to produce Happy, Confident, Obedient dogs on or off leash in any environment as well as Happy, Confident, Satisfied owners."

That is certainly the goal of any dog trainer - but it's certainly not the goal to do it at any cost. On the main page of the Unleashed Potential's website - the first 3 video's are positive demonstrations of their use of shock collars - "e collar demonstration with an out of control dog", "6 year old girl trains a rottweiller", and "e-collar? You be the judge"

I say this because the time has come to start talking about dog trainers that offer training that trains with bells and whistles that may have repurcussions for your relationship down the road between you and your dog - and there are dog trainers out there that will offer you training that helps to foster and build a loving relationship between you and your dog that will never make any problems you may be having that brought you to obedience training with your dog - worse.

There's another trainer right now - Brad Pattison - who's decided to sue a bunch of trainers across Canada - because they've been critical of the way he treats dogs and their owners on his tv show - he's suing them for millions of dollars and it's mostly based on the below video - there's an American trainer, Drayton Michaels who I love, love, love - he made a video called "the pit bull hoax" that is awesome that I have - and he's also got a blog at Dog Star Daily - and he wrote a post about Brad Pattison where he says -

"I absolutely abhor people who hurt dogs, period; and if anyone has a problem with my attitude too bad. After all is this not the same attitude these guys use with dogs and owners, so why not toss it back at them? The polite approach has gotten us nowhere. It is time to call these types of methods out and hold the people who use and promote them accountable.

One of the problems with legit dog trainers and legit dog behavior people is they are not tough enough on abuse trainers. Get with it people, these guys get away with it because enough people who know better look the other way and say “oh it is not that bad” or “ Oh wll what can I do”. It’s bad and here is why.

People are attempting these “methods” and they are creating more problems such as aggression, fear and anxiety in dogs. These types of shows create junior versions of the TV trainers, and it’s not a good thing. This force based methodology then gets used by owners as a way of interacting with the dog on a daily basis. This leads to quite a bit of squelching behaviors with harsh verbal’s, varying degrees of physical abuse from both hands and equipment. Not much teaching or training as it were, and well a rather adversarial relationship. Building bonds not binds should be a guiding principal, especially on these shows. They play like it is, but in reality there’s a whole lots of negative associations and fears getting instilled in dogs.

Learned helplessness is not being calm and submissive. Smacking a dog in the face until it submits is not being alpha; it’s being abusive. This has been proven time and again by many scientific findings with verifiable data. But like in the court of law where credible science in relation to dog behavior gets ignored so it seems it gets left out in TV network board rooms and among some people who are self proclaimed “experts”.

So along comes Brad Pattison. A guy with what seems to be zero legit education in dog behavior or training. A guy who it appears is making it up as he goes along by cherry picking ideas and approaches. It makes his views on dogs and training quite contradictory. His beliefs and actions seem miles apart."

That is some awesome writing there. Drayton Michaels is telling it like it is. And it's about time.

I wrote a post back in January about local dog trainers - and the fact that there are some that are very good, and some that are not "very good" - and I am worried that the "not very good" trainers are starting to get a leg up with the beginning of classes at Petworks. I hope that not too many people get taken in by the double speak and then believe that this is the only way they're supposed to train their dogs.

There are a lot of great trainers locally - and they're easy to pick out - they are the ones that don't use sentences like "we train with the use of praise and correction", and "Techniques used must include a balance of both correction and praise", and "we are a results based dog training service"

I much prefer lines like "bringing an unrivalled passion for the canine spirit", "motivational, force free, and amazingly effective!", "Ultra Gentle Methods", "Teaching for Understanding" - those are the types of lines I'd be looking for at a dog trainers website, personally. I hope you'd be, too.

I have my normal hyperlinks to everything - out of this post, on purpose.