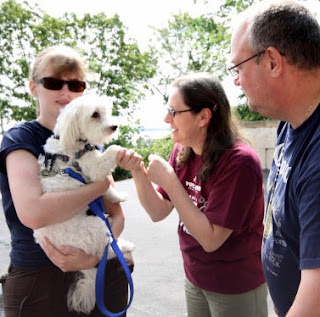 So I didn't get to the Vetcetera SPCA/Pick of the Litter Dog Wash that was happening last weekend in Bedford, but my friend Pat did - and she let me use some of the pictures she took to show all the fun everybody had that me and Buttercup didn't have - so I'm posting them here! This is Pat's dog Teddy that she recently adopted from the Lillian Albion shelter in Amherst with Kelly Welsh, Inge Sadler, and Pat's husband - cooing over Teddy - I think Teddy is trying to say that he's the new dog in town and he's ready to take over! 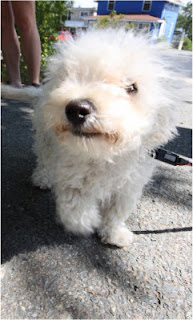 This little 4 month old puppy is just the cutest thing! 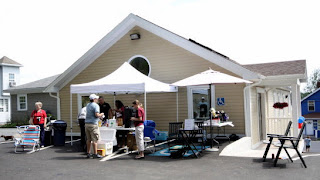 By all accounts the dog wash was a huge success - they had perfect weather - tons of dogs showed up - proceeds went to the SPCA and Pick of the Litter - I don't know what other veterinarian shuts down their clinic for a whole day just so they can raise money for rescue - do you? I think that was just fabulous - and shows great philanthropy on the part of the vets there - they've done that now for several years - I understand they've recently done renovations, so this was also their grand reopening as well. 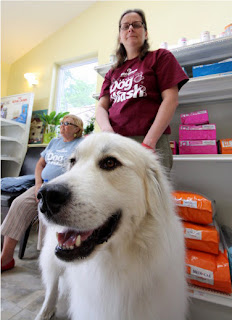 Here's Inge Sadler again from the cat rescue, Pick of the Litter with a great pyrenee 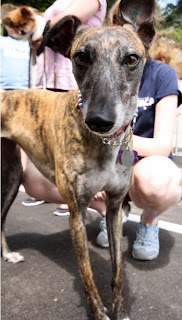 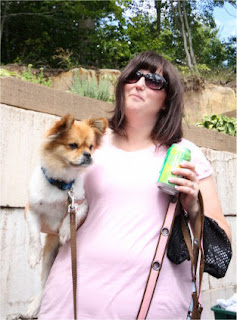 The mix of this little dog looks very interesting! 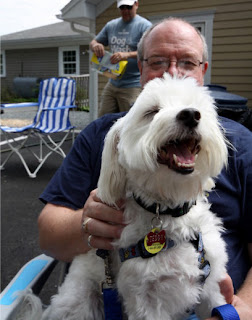 Teddy with his Dad again being king of the world 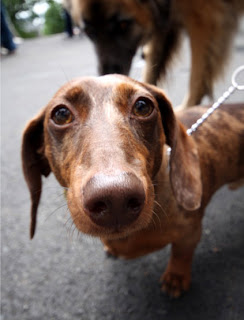 This was a little dachshund Pat met named Dexter that Pat fell in love with, and I think we can understand why 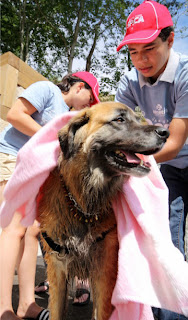 This is everyone's favourite leonberger Nells getting a bath! 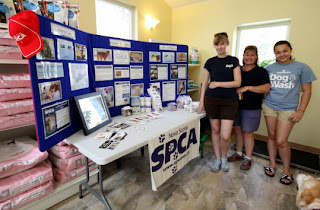 And this is the very informative and educating SPCA travelling show that we get to see at lots of local shows being manned her by Kelly Welsh, the Dartmouth SPCA's manager Kathy Thomas and Kathy's daughter!
Posted by Joan Sinden at Wednesday, August 25, 2010

Email ThisBlogThis!Share to TwitterShare to FacebookShare to Pinterest
Labels: Past Dog Events, stuff to do coming up, Veterinarians