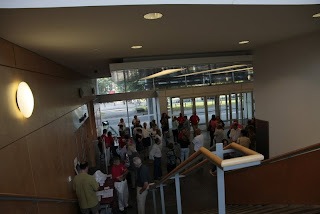 So last night was the showing of the movie "Tom McPhee's An American Opera - the Greatest Pet Rescue Ever" - it was a fundraiser for DART Nova Scotia - and quite a few people showed up - I'd say a good time was had by all, it was a really good movie, that's for sure 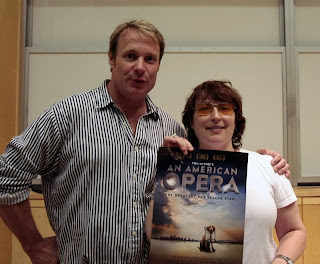 This is the producer, director, narrator, star of the film - Tom McPhee with inveterate gad about town Janet Chernin 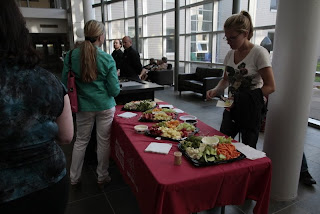 This is the spread put on by DART - free food is always great!

I don't know about you - but I remember Hurricane Katrina vividly - I wrote about it a lot on this blog - the first time I wrote anything was September 3rd, 2005 when I talked about emergency preparedness - I was really freaked out by what had happened and especially the little dog Snowball. Do you remember him? That little dog that the kid at the Superdome wasn't allowed to take on the bus - and he never found afterwards? I think everybody in North America was affected by that little kid and that little dog.

But then as things progressed, and we started to started to hear some really disturbing things - not just about the humans, but about what was happening to the companion animals. On September 11th, 2005 I wrote about the fact that I was getting about 100 emails a day about what was going on with the animals affected by Katrina and the fact that animals were starting to die, and that dogs were being shot in certain counties 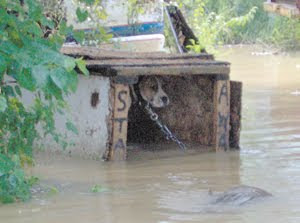 September 12th, 2005 - animal advocates around North America began to realize the enormity of the situation that was happening down in New Orleans -

And then on October 3rd, 2005 - it was like it couldn't get any worse - irrefutable evidence that pets had been massacred in a school in St Bernard's Parish - and Tom McPhee did a beautiful job of portraying the horror of this last night - a really really good job of this. 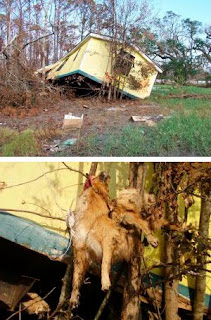 The last time I wrote about Katrina was November 5th, 2005 when I wrote about a poem I'd found called "An Apology to the dogs of New Orleans" which was an awesome thing written dedicated to all the dogs who made it, and didn't make it - out of the hurricane.

So personally - everything that was in last night's movie - I had already seen, and lived through five years ago when hurricane Katrina actually happened - and it's all still vivid in my own mind - just like the people who were down in New Orleans - Hurricane Katrina really was a life altering event for me, personally - getting those 100's of emails every day describing what was going on, and having people down there that I actually knew who were living through the experience reporting back - affected me until today.

There were a couple times in the movie last night that I giggled - at the beginning of the movie there is a very obvious reference to Apocolypse Now - his girlfriend at the time is laying on a bed, there's suggestive music playing, the camera is in close to her face, then it cuts to a ceiling fan, then to her face with her hands behind her head, then to the ceiling fan - then to a helicopter - I had to giggle - but who is Captain Willard, is it the girlfriend who we only see in a couple of shots? Or is it Tom McPhee? Or maybe Tom McPhee is Marlon Brando? He does have a little bit of a belly. He really is an enigma!

I guess we'll have to wait until his next movie comes out and we'll get another cue.

I'm interested to see what comes out in the future from his organization "World Animal Awareness Society" - which he was branding as a "consumer reports" type organizaiton for animal advocacy - because in the movie he interviewed Wayne Pacelle a couple times, and HSUS comes across in the movie in quite a positive light - so in the question and answer session after the movie someone asked Tom how he felt about the organization and he said (more or less) that he felt that HSUS was a stand up organization - that a corporation that was that big and had that many assets couldn't be bad.

There were a couple people in the audience who really wanted to take him to task on it - but he completely shut them down - but he really liked HSUS and thought they were a great Society that was doing good things. And I have to say - that really ended the evening on a sour note.
Posted by Joan Sinden at Monday, August 09, 2010