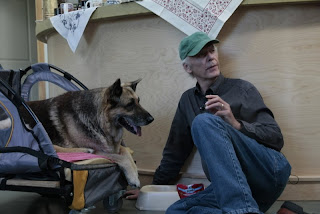 Today I was invited to a performance of a dog named Emma Lee - a 13 year old german shepherd who's owner believes can communicate with him psychically and via a morse code type communication through licking milk bone treats he holds in his hands after he's asked her specific questions. Veterinarian Julie Weste over in Lawrencetown had a little get together this afternoon so that people could meet Emma Lee and her owner - and I went over and videotaped some of what went on - 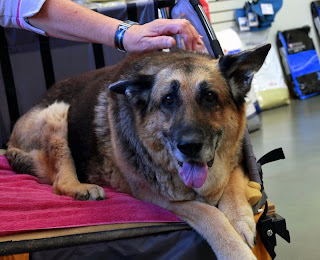 And I'm not going to make any judgements at all of what I videotaped - I am just going to put out there into the stratoshpere what I documented - and you can judge for yourself what you see. What I definitely saw was a dog and a man deeply bonded and in love with each other who could for sure communicate with each other - no doubt about that. And Morse code type communication is such a simple way to talk to each other - I think that a smart dog could learn that pretty easy - I think actually that this man might be on to something..... you should watch the video and see what you think! It's just down the post a bit. 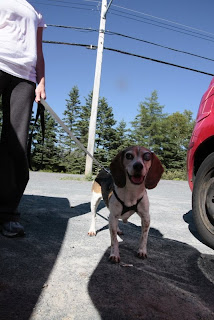 While I was there though I met a very nice lady - Joyce Burns who runs a cat rescue - and she has this lovely little dog Toby - and she also does homeopathy - for humans and animals - and she's got a website called "Healing Grace Homeopathy" - it's always neat to meet new people who have interesting skills. I've had her cat rescue listed on my links page of my website for quite awhile, but today was the first time I've met her in person. Her cat rescue has a neat name too "Gift of Grace" 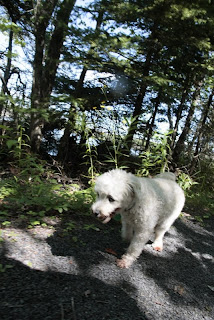 Buttercup and I were staying well away from the downtown today because of the country music concert going on down at the Halifax Common's, so we were out in Bayer's Lake - and I've always been interested in that little lake that's out there on Chain Lake Drive, because it appears as if there's a trail on it - so today me and Buttercup stopped at the spot where I thought there might be a place where the trail starts - and guess what there is! It's across the street from Clarke's Transport 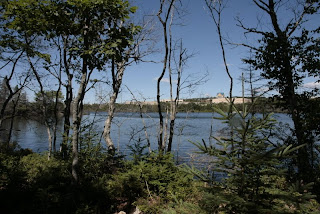 It's a nice walk, we went in a little ways - we didn't have a lot of time to walk today and Buttercup can't go too far anyway, so I'll have to go back with the big dogs to see how far around the little lake it goes, but it seems like a nice spot. 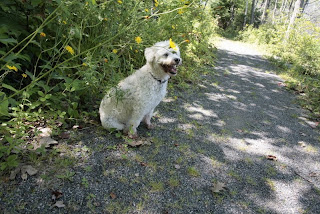 We had a good time this afternoon though.

Tomorrow night at Dalhousie there's going to be a really good movie playing if you're interested - "An American Opera" - it's about the Katrina fiasco - and it starts at 6pm at The Marion McCain Arts & Social Sciences Building - 6135 University Ave, tickets are $20 and money is going to the Disaster Animal Response Team

Another documentary I wanted to mention is the Global documentary that was on recently - "No Country for Animals" - if you missed it when it was on, or you want to watch it or recommend it to someone who didn't get to see it - it's available to watch online in it's entirety at http://www.globallethbridge.com/story.html?id=3336734- so you should go check it out - it's all about "Canada’s deplorable record on animal welfare and it looks at the people who are fighting to bring about much-needed change."

And if you're still in the mood for one last video - the people who are trying to make sure that as many people as possible know who Gail Benoit is and that she refuses to stop brokering puppies as her career of choice - have made a new video in preparation for her upcoming trial on cruelty to animals in October, 2010 - and it is a super, super video - you can view it below -