Fun Stuff to do Coming Up

There's stuff to do coming up if you're interested -

Tomorrow join volunteers from the SPCA and others - August 21st - from 10am - 4pm at Vetcetera Animal Hospital in Bedford for their Annual Dog Wash!!!!!! Come with or with out your dog to see the new Vetcetera facility and have a bite to eat at the BBQ. Proceeds Benefiting the SPCA, Pick of the Litter and Bide Awhile!

I mentioned this last weekend, but I'll mention it again - lab rescue is holding a fundraise on August 25th - speed dating at Gulla-bulls on Spring Garden Road - sounds like fun for those who are interested in that type of thing! They have an event page set up if you'd like more information about!

The Atlantic Small Dog Rescue people are having a picnic and Fund Raiser on August 28th at "Sandra's house" on 30 Terry Road - here's what it says on their Facebook event page - "This August ASDR will be having a get together. We will have a yardsale in the morning and hot dogs in the afternoon. Everyone is welcome but please RSVP so Sandra knows how much food to get. If anyone feels like bringing salads or something else that would be lovely!" - so go check out their Facebook page and RSVP!!

There is a new book coming out called "Animal Talk" - from Nimbus Publications, and it's being released next weekend - they're having the launch for the book at the Hope For Wildlife Open house August 29th from 12 to 4pm over in Seaforth - it looks like a really neat book, and a good cause - so you should go check it out!

Everyone's favourite dog physiotherapist is starting her own human physiotherapy business! Yay! Shelly Malcolm-Beazley had the cutest baby in the world and went off on maternity leave a few months ago, and used that time to get things together to start up her own company! So starting on September 7th, 2010 - she'll be taking clients at "Cove Sport Therapy" with her partner Natalie, an Athletic Therapist and Osteopath. Shelly is still doing the dog physiotherapy and will have a room at the clinic for animals - so "Pawsitive Action Physiotherapy" is still going to be helping the aching dogs of the HRM - and hopefully getting bigger and better! Congratulations Shelly on your new ventures (and baby!) - and I'm sure you'll be a huge success!

Ongoing at the Pogue Fado are the charity Wing-ding's - on the last Monday of every month are fundraiser's for the NS SPCA - from 5 to 8 pm. Yummy.... 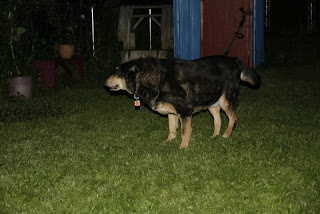 (This is as much dog play as we could come up with today...its too damn hot)
There are still a couple spots left for Silvia Jay and Adina MacRae's Seminar on September 18th and 19th about dog communication where they're going to talk about dog communication - it's going to be an absolutely fabulous day where in the morning they're going to talk to us about how dogs actually communicate with each other - what types of scenarios could lead to an acutal dog fight - and what is only dog play, why is it so important to understand how dog's play, managing multiple dog households, daycare and shelter interactions, plus tons of other stuff - and then in the afternoon we're all going to go over to Seaview Park - and watch the dogs playing there - and Adina and Silvia are going to break it down for us as we observe the dogs coming and going and interacting with each other. So exciting! I'm excited because I'm personally going - the same seminar is happening on both Saturday and Sunday and there's a limit of 20 people on each day and there's only a couple spots left for each day - so if you've been thinking about going - and thought it might be all booked up - it still isn't - so email seminarswithsilvia@gmail.com for further info!

When the lady from Nimbus Books was emailing the about the "Animal Talk" book she told me that they have an office dog, and that they'd made a video and posted it to You Tube - and I thought it was so cute, I'm posting it here - please enjoy this short video of "Nala"!!

Email ThisBlogThis!Share to TwitterShare to FacebookShare to Pinterest
Labels: hope swinimer, stuff to do coming up