Today was the GPAC Doggy Expo! 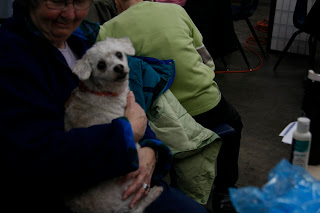 So I'd say today's GPAC Doggy Expo was a big hit - there was a TON of people and their dogs who went through the Multi-Purpose Centre at the Halifax Forum - this year was the biggest turnout for vendors and people, I'd bet. This photo is a picture of Buttercup saying to me - "you're going to leave me to go take pictures now, aren't you! I hate you!" 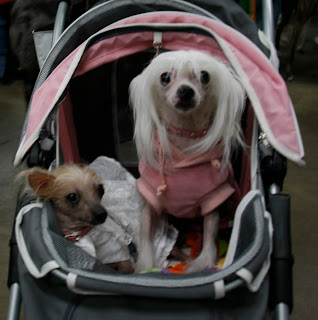 Is this not the cutest thing? If I could get Buttercup to sit in a stroller my life would SO much easier! I wonder if these are the same chinese crested dogs I saw at the Halifax Kennel Club show last weekend - if not, there are a BUNCH of chinese crested dogs in Halifax now! 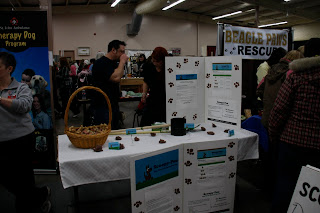 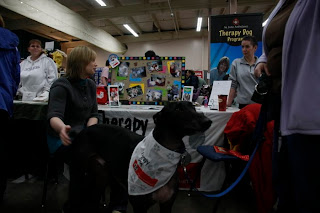 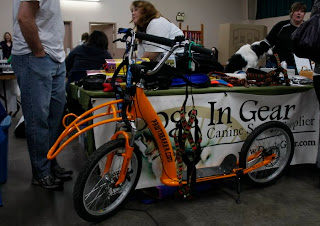 Is this a neat machine, or what? It's a "Pawtrekker" and you hook your dog up to it and he pulls you along and gets super exercise! They only cost around $450 - and I have to admit that I've probably spent more for things that aren't nearly as good for the dogs. And this is a local company too who've been around for awhile - http://dogsingear.ca/ - they also sell life jackets, back packs, ganglines, and all kinds of fun stuff - they are super. 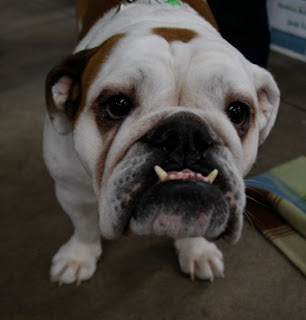 Now for some fun stuff! I didn't get this guy's name - he was in front of the Halifax Kennel Club booth - he was gorgeous 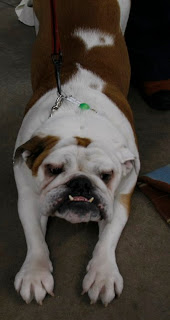 And he certainly didn't seem to mind all the stuff going on around him - he was having a great time! 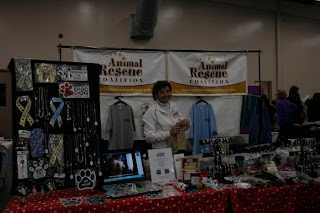 Here is the Animal Rescue Coalitions booth - look at all the great stuff they were selling! With all proceeeds going to their rescue of course! They are one of the rescues that I personally volunteer with the most, so I always have to take a photo of their booth! 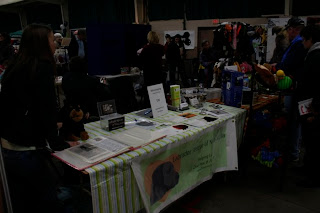 And here's another booth who takes in a lot of local dogs - because there's a lot of dogs who are of this type - labrador rescue! Run by Pittman - and right next door to this booth was the store she owns - the Doggy Bag Treatery, which sells you can probably guess what! 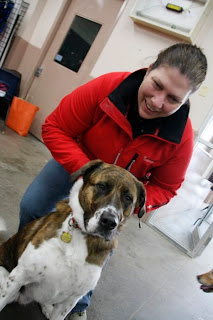 This was a dog of a co-worker of mine! Yea! 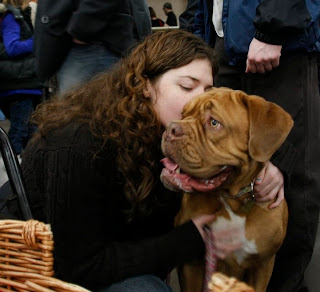 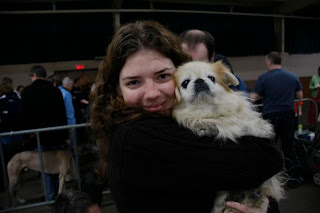 This is Gary's sister who his Mom Heather adopted last year - who is also gorgeous, and from the look of Gary's blog seems to be keeping up quite well with Gary. 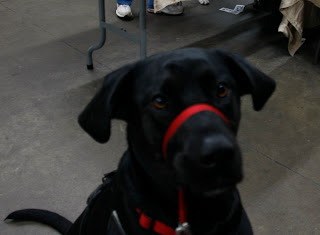 This is Jenny - another famous dog in the local dog community in some circles - his Dad Marc takes her to all the local hot spots - Seaview, Long Lake - her and her brother are super active (and lucky) dogs! 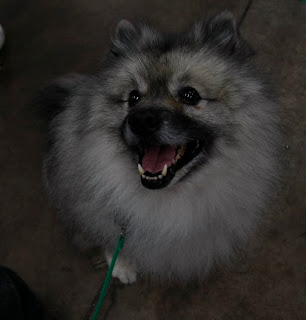 This dog was impossible to take a bad photo of! This is a keeshond named Jack who's Mom is a local dog trainer by the name of Aimee Luedey - she is also a vet tech in Dartmouth - she's currently on maternity leave though, and right at the end of our conversation I noticed she had a baby carriage with her! haha! I noticed her dog and took photos, and we talked - and never noticed she had a little baby - I suppose most people would have right away gooed and gaaed over the baby - dog people are funny, eh? But with a dog like this - who could blame me? 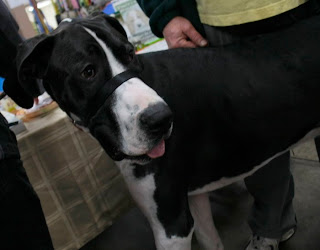 I saw so many famous dogs today! This is a great dane from the owner of the Great Danes of Nova Scotia group owner Denise - who I officially met for the first time today - but I can't remember if this dog's name was Daisy or not. At this point in the day I was getting a bit bleary eyed! 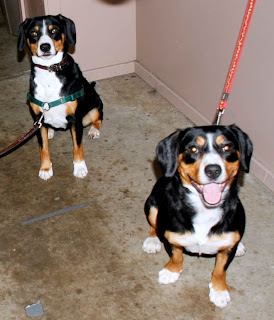 Here are a couple of very beautiful entlebucher dogs - Sante and Sandy - Sante is owned by the sister of a very good friend of mine - they are wonderful, kid friendly, gentle dogs - aren't they beautiful? Lovely dogs. 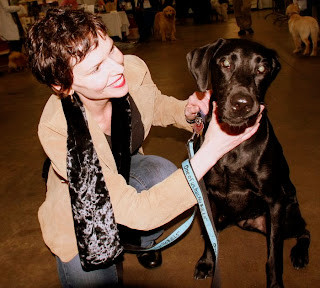 And here is the current queen of letter writing for letters to the editor - Tracy Jessiman with one of her dogs - Sam! Can you see what's written on Sam's leash? It's very true! haha! 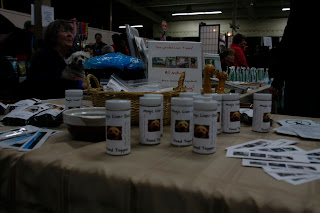 This is a little shot of my table - I've added a new product to my "dogkisser" line - a thing I'm calling "Magic liver dust" - it's a food topper that you put on top of your dog's food if they're a picky eater - and it's my dehydrated liver that's been ground up into a powder. Buttercup was my tester for this because she's a notoriously picky eater (I'll post later a video of how I'm currently having to feed her) - and if you sprinkle some of this stuff on your dog's regular food - then it makes it more palatable. If you dog likes liver - they'll like this stuff.

I also got good news today - because Global Pets in Bayer's Lake is going to start to carry my liver! Yea! So no Metro Dog Wash, 3 Dog Bakery, and Metro Dog Wash will be carrying my liver. I may actually have to start paying my Dad for helping me to cut the stuff up!

I also had information on my table about the new website for anti-chaining legislation - I've been working on the site, so there's some good information there now - http://bringthedogsin.ca/ - there's going to be a petition there shortly for people to start signing - a few people stopped to take the cards, so I was happy about that.

Hopefully everyone had a good day - I had a pretty good time - I got to meet a lot of new people - it's always a great day to schmooze - now I think I'll lay on the floor and let the big dogs lay on top of me for a few hours!

Email ThisBlogThis!Share to TwitterShare to FacebookShare to Pinterest
Labels: Past Dog Events, sante