Life and death of dog on a chain on Mayor Ave in Spryfield, Nova Scotia I loved this dog. This dog's name was Zeus. I've talked about Zeus before in year's past. He lived next door to me here where I live now. I can talk about him again now because his owners have moved away, and Zeus is dead anyway, so what does it matter anymore. I stopped talking about him in deference to his owner because he was worried that someone would come and hurt Zeus because people knew where I lived, and by association they'd know where Zeus was - and they'd steal him - so I stopped talking about the fact that I lived next door to a chained dog that I couldn't do anything about. Because it was true - somebody might have come and hurt him, or done something to him. And it was weird - Zeus's owner DID love him. 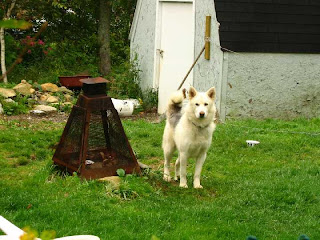 That is what is so awful about this story - Zeus's owner actually DID love him - he was one of those dog owners - a "husky dog owner" who said that his dog "wanted to be outdoors". Zeus was "too hot" indoors and wanted to be outdoors. Over the years I tried everything to get Zeus indoors. I tried asking his owner if he'd let me rehome him, if he'd let me have him, if there was any way that it could be worked that he could go indoors some times. No, no, his wife didn't want Zeus inside anyway - "too much hair to deal with since the babies were born."

So I was an anti-chaining activist living next door to a chained dog that I couldn't do anything about - he was the first thing I saw every morning when I got up, and the last thing I saw every night before I went to bed - 365 days a year, in all weather - and when the weather was the worst, Zeus stayed outside his dog house it seemed - it was like his dog house got too wet or something - so he preferred to stay outside.

Zeus got loose all the time and would go on "walk abouts" around the neighbourhood and beyond - my neighbour would holler at the top of his lungs - ZEUS! over and over for hours, and some times days - and eventually Zeus would come back. A couple times Zeus ended up at Animal Control - and my neighbour once had to pay over $300 to get Zeus back - because of vet bills and pound costs. But my neighbour paid it - he loved Zeus. And he brought him back and put the same chain on him again. 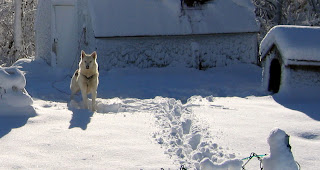 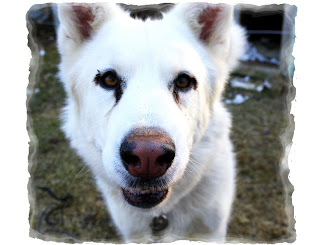 My neighbour a couple years ago though had a marriage breakup - and this was the weirdest thing - once the wife left - Zeus started getting to go in the house! It was awesome. In the daytime I'd see my neighbour take Zeus inside - and Zeus was starting to be treated better. I couldn't believe it.

Previously Zeus would sometimes be ignored for days at a time - but now Zeus was being fed everyday, he was getting attention, I even saw him going in the car a couple times. He was still being tied out - and getting loose and going for walk-abouts - but at least he was starting to get some semblance of a life. I was amazed. 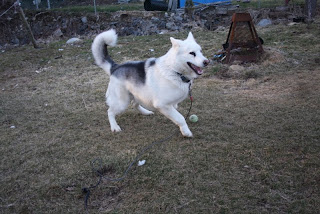 This photo and the previous one were taken when I was taking care of Zeus while his owner went away for a few days and his owner asked me to feed and play with Zeus - I was so happy to be able to spend some time with him! He was such an awesome dog! When he was tied out for so many years I would call him my silent 5th (or 4th or 6th or however many dogs I had at the time) dog. I worried over him like I did my own dogs. I would throw him treats when I was in the backyard wshen I was giving my own guys treats - which for awhile got me in trouble with my neighbour - as it does a lot of neighbours who have dogs next door who are chained. 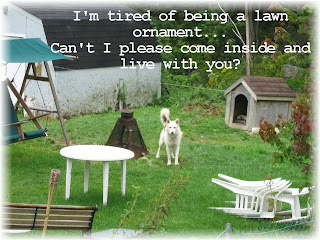 But unfortunately this story doesn't have a happy ending.

Even though Zeus was starting to get to go inside, and was getting some love from his owner, who did love him - his owner just had some weird cultural ideas about husky type dogs - he was still chaining him out on a regular basis - and Zeus was still getting loose on a regular basis - and on one of his walk-abouts last summer - Zeus came home with a huge gash on his head. Nothing happened for a couple of weeks - but about 10 days after coming home Zeus started getting lame on his back end, and then became paralyzed, and within a week - was dead.

It was always my worst fear that I would see Zeus die on the end of his chain in that back yard next door to me - and that is what happened - because of being on a chain - unsupervised in that backyard - he died. 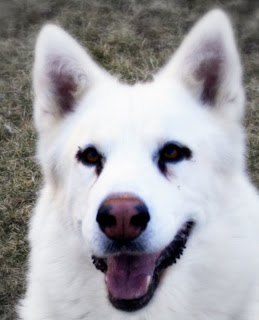 He had a gentleness that even thousands of days outside, abandoned in a backyard couldn't kill - and it ended on a night somewhere in Spryfield when he was hit by a car while on a walk-about. He should have been home in bed.

Its for dogs like Zeus that we need new legislation in Nova Scotia - we need legislation that will limit the amount of time that dogs can be tied out - dogs do not need to be tied out for 24 hours a day, 365 days a year. Legislation exists elsewhere that works very well that limits tethering so that dogs don't need to die at the end of chains - either by freezing to death, getting loose and killing someone, or themselves, or dying from heatstroke - and being abandoned in backyards.

I think it's a win-win situation. Legislation, together with education, will save lives - human and canine. And the time is now. There are enough lawn ornaments of the non-sentient variety.

Before I put my fence up, Zeus used to spend quite a bit of time over on my side of a "moat" that separates my yard from my neighbours yard - here's a video where I'm throwing liver treats to my dogs and to Zeus - it's kind of cute, I called it - "ring around the liver" -


This is video is also from 2006 - it's video also of me throwing treats in the backyard and also of the dogs wrestling in the living room - and Buttercup back when she used to be able to hump Daisy. I have to say - I REALLY miss that hardwood living room floor. I loved that floor. boo hoo for me. This video is a must see.

Email ThisBlogThis!Share to TwitterShare to FacebookShare to Pinterest
Labels: chained dogs, My Backyard