There have been a lot of dogs going missing locally lately, it seems. If you're on Facebook - you've seen 2 dogs in Springhill, a dog named Gilley, Marlo the golden retriever - and the now infamous Chykato from Antigonish who got off his chain and became a foundling of the good people of the Antigonish SPCA - but later was given back to his original owners when it was found out he had a home to go back to. And all these dogs' stories happened in just the last 2 or 3 weeks.

Most dogs never find their way home. At an SPCA event a couple years ago they gave the statistic that 75% of the dogs that come in from Animal Control to them come in as STRAYS -

Stray dogs could be defined as something like - "Straying or having strayed; wandering or lost" - I found that at "the freedictionary.com" - it's pretty lame, but it's also accurate, it's just that simple. A stray dog is simply a dog that's walked off it's owners premises and become lost - every stray dog is a dog who DID have a home at some point - it might have been a really shitty home, but it was a home. And guess what - SOME of those homes were awesome homes. And some of those homes were looking for their dogs day and night - but just had seriously bad luck. 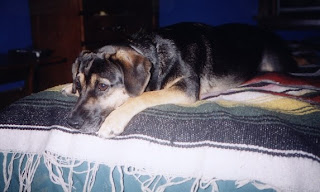 George, my very first dogs - was a "lost" picked up in Porter's Lake.

There's a movement in the humane community down in the States - and maybe here in Canada too - to change people's mindframes about the idea of stray dogs - from them being dogs who are homeless to dogs who are simply lost and need to find their owners - and the catchphrase is "THINK LOST, NOT STRAY".

The leader in this movement is a lady by the name of Kat Albrecht - and she's working with organizations like Best Friends Animal Society, Petfinder, No Kill Advocacy - and her own organization called "The Missing Pet Partnership". 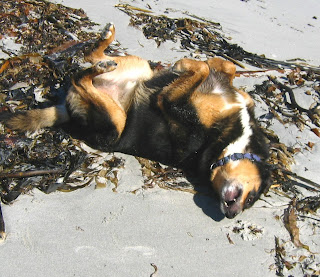 It's all about making a paradigm shift in our thinking about "stray" dogs. And I think it is SO important. 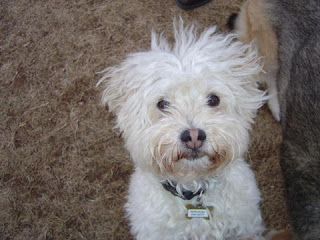 
It could be a town's registration tag, a rabies tag, a $2 tag - whatever - but SOME sort of thing on a collar that says that YOU own that dog - that's all the dog needs to bring him home to you. It's that simple. Or a microchip. Whatever. I hear people say that "well people could just take the collar off, or not check for a microchip" - the chances that someone is going to do that - are a chance you're going to have to take - and I'd say they're a lot less than someone who's going to find your dog, and say "thank GOD there's a tag on that collar so I can get this dog home!"

Just imagine how many fewer dogs would be killed in shelters if there were even 50% fewer stray dogs out there having to be processed by animal control and processing through the system to their end (either death or adoption).

I think it's a fabulous movement in the humane community, and I hope it catches on. 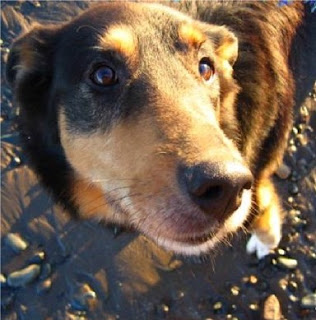 Philip was picked up as a stray in Lawrencetown in 2006


Certainly this could also be one of the main reasons NOT to chain your dog outside unsupervised as well - this goes without saying. Maybe I should finally come out here and say that I'm a long time volunteer with the organization Dogs Deserve Better - which probably, if you're a long time reader of this blog, you've probably already figured out. What you may not know is that I feel strongly enough about the cause that I've been a long time rep for the organziation for this end of Canada as well.

I wonder how many stray dogs are dogs that were chained outside. At one point I wrote an article for the DDB website about chained dogs running free - and how that was not the aim of the organization - inside and onleash was the aim - and that is also the way to keep them safe at home - and not at animal control and on their way to a new home.

I must say though, that I've personally done very well through stray dogs - I've gotten a lot of dogs through other people's lost dogs - and so have just about all my friends.

But I think it would be really neat if local humane organizations would start to look at the animals coming into their facilities as "strays" to stop thinking of them as animals coming in with completely blank slates. They do have a history - if they were picked up in Lawrencetown - is there someone looking for them there? I know that everyone is overworked - but our animals are part of our families. They're worth it - especially for the families who are looking for them night and day, and just don't know how to do it. And even if they did get away because they were on a chain - maybe they just need some education.

And there's lots of education out there, that's for sure.
Posted by Joan Sinden at Thursday, January 14, 2010