It wasn't too cold to carry a pink poodle in your mouth + Shelly Malcolm! 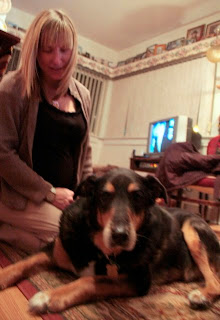 So today Shelly Malcolm - the dog physiotherapist, came over to give Charlie a visit - I had some advice from my animal communicator, Maggie Carruthers - that Charlie might be in a bit of pain on his left side - and she recommended that Charlie could use some acupuncture. You can tell from this photo what Charlie thought about the whole thing! haha! Charlie has SUCH an expressive face! And he does PISSED OFF very well! I am sure he was very thankful though when Shelly released a couple of his very sore muscles though. 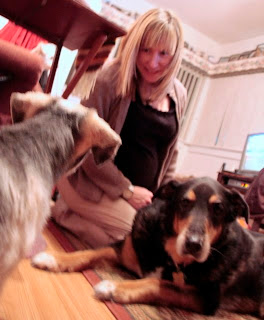 This is Jackie coming in to say - don't screw with my brother! Jackie was only the 2nd or 3rd dog that has ever bit poor Shelly in the whole time she's been a dog physiotherapist - so he's a very special dog! In more ways than one. I have to say though - that I don't think he's even tried to bite me in months and months - so he has come a LONG way. He is such a good boy. He is a total lover now - and I never thought I'd say that - we're coming up to our 2 year anniversary in just a couple of weeks. Right here though - Charlie'd like to take a bite out of something himself I think! 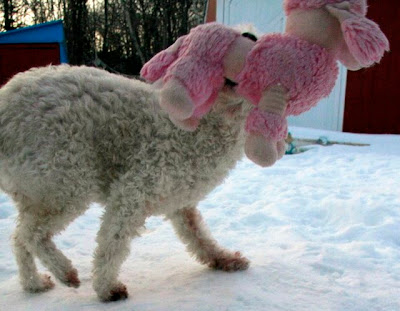 Before Shelly came over we spent some time in the backyard - and today, Buttercup was on fire! And her fire was centred around a bright pink poodle toy that she has - and she was just being the cutest little thing in the world. 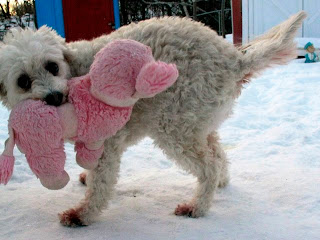 It might be -20 degrees Celcius out with the windchill - but when Buttercup decides that she feels like playing - EVERYONE around her is going to play! 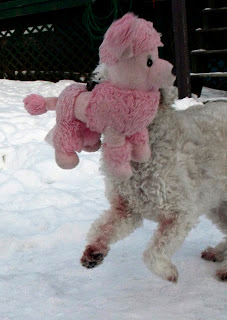 And that invariably inlcudes me - and I am always up for some playing - so that's what we did this afternoon - and every minute of it is a wonderful gift. 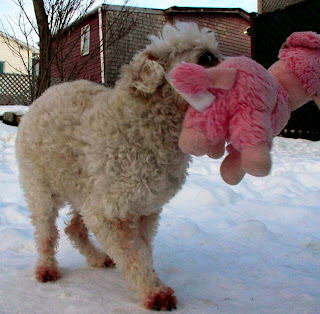 I'd say I'm just about the luckiest girl in the world to have this running around in front of me when I get home after a long day at work - even if it IS -20 degrees celcius outside! It's worth every moment! For as long as she's up for it - so am I.
Posted by Joan Sinden at Tuesday, January 12, 2010

Email ThisBlogThis!Share to TwitterShare to FacebookShare to Pinterest
Labels: My Backyard