I wanted to make a post about this in counterpoint to the Janice Bingley/great dane puppy SPCA seizure post - the fact that Donna Boyd - who I also talked about in my first post about the Westville dogs seizure - she continues to sell her puppies unabated this pre Christmas week to an unsuspecting public - in the Chronicle Herald pet ads no less. 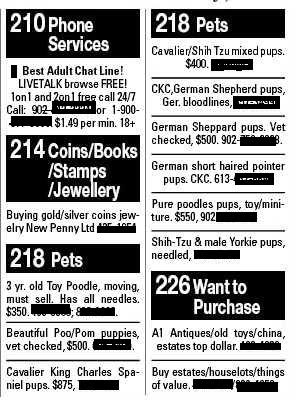 These 2 photos are of Pet ads from the Chronicle Herald this week - one from December 16th and the other from December 9th - and both from the Chronicle Herald Pet ads. Donna Boyds ads are the ones that say "Cavalier/Shih Tzu mixed pups $400", "Cavalier King Charles Spaniel Pups", and a 2nd ad for the "Cavalier/Shih Tzu mixed pups at $400.

And the anonymity of the Chronicle Herald DOES sell tons of puppies. 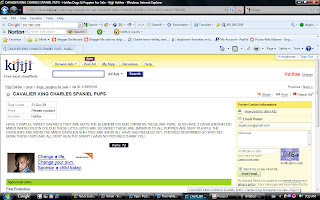 As well - on December 22nd = she's also advertising on Kijiji - here's her ad there.


The day after I wrote my post about the Westville dogs and Donna Boyd from Wilmot and Joe and Nan's Pups and the puppy mills they run - I had an email from a lady who said that her mother had told her she was looking to buy a puppy..... well, I'll let you read the email she sent me -

Hello,
Your recent blog post from December 5, 2009 couldn't have come at a better time. I am originally from Annapolis Royal, NS. I am currently living in .... I got a call last night from my mom (who still lives in Annapolis) and she was saying that she had found an ad for a puppy in the Wilmot area and she had talked to the lady and was going to go see the pups this weekend. I immediately started drilling her with questions about the "breeder", the name of the kennel, whether she had checked with the lady's vet and all of that jazz...God love my mom for being completely naive...she had not done any of that and couldn't even remember the lady's name. Well, 5 minutes of searching online found the ad in the Chronicle Herald, a reverse name lookup with the phone number and a quick google of the name and voila....your post. Boyd was the name of the "breeder" and the description of her setup and the puppies was enough for me to say "no thanks" and let my mom know that she needs to look elsewhere. So...thank you very much :-) You have probably saved a lot of heartache.
I would love for my mom to find a great dog, she had a rough go with the last one she had. About 6 years ago she had a great NS Duck Toller that died after getting caught in an illegally set Bear Claw trap on her own land. It was an awful experience for her and it has really left her gun shy about owning another dog. Nothing came of the investigation after with the Department of Lands and Forrest and it was very disappointing. They talked to a few people and my mom suspects it was one of her neighbours down the road who just didn't use their brain. Who sets a trap 5 feet from a wood's road on land that doesn't even belong to them? A dead chicken in a bucket....what dog could resist? Argh. Terrible stuff.
I am going to be seriously pushing my mom to talk to a "real" breeder or better yet, check out the animal shelters in the area. It is such a nice feeling to rescue a dog. I love my retired greyhound :-)
Thanks again,

So at least we've saved one family from a lifetime of genetic heartache. No thanks to bad legislation here in Nova Scotia because the SPCA can do nothing about "breeders" like ones who live in sub divisons and keep 100 dogs in their basement - it does seem to appear as though there is an unevenness in the way they deal with people who deal in puppies in this province currently.
Posted by Joan Sinden at Saturday, December 19, 2009