The beauty of buoy booty at Peggy's Cove

I knew it was fate that made me take my own car out there for supper - so after we ate I went down to the little place the man has set up - made out of lobster traps - and I went in there and the first thing out of my mouth was - "I'm obsessed with finding buoys when I go to the beach" - and our conversation started from there. The fellow who has the place set up was a fisherman starting in the 1950's and these are buoys that he personally used, and has collected over the years - and his family owns the gift shop that is next door to where he is.

He and I talked for awhile, and then I had to get down to the hard task of picking out a couple of buoys to buy. I chose ones that I would probably still find on the beach but were in almost perfect condition - and I also got a string of toggle buoys that he had stringed together - some of which are still used, and some which are really old - like some cork floats and some other floats which aren't used anymore, so they are really special.

He is selling them very cheaply - and he's got really nice ones in there along with some glass floats too - antiquey type stuff - and wooden buoys of course - which aren't used anymore either - but my personal favourites are the styrofoam buoys - the brighter, the better - which is the favourite of this guy too -

I bought 2 that he had personally used. As I was leaving he came out to my car and brought me an extra string of the toggle buoys - which really touched me - he was such a nice man, just there selling the buoys and having converastions. It was great. I had such a good time.

I thought I'd post a few pictures that I've taken in the last few days - even when I don't post them here I am always taking photos of the dogs - unless I'm feeling particularly unwell, and then I'm just sleeping - but some of the photos in the last few days have been pretty good if I do say so - and 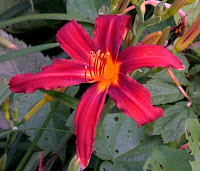 I've also been on a flower photo-taking jag - and when I take photos of flowers I usually add them to my flower photo collection in a Facebook photo album I have at http://www.facebook.com/album.php?aid=61891&id=592875545&l=74153edb34 that you can take a look at if you feel so inclined. I like flowers - I wish I could them better. 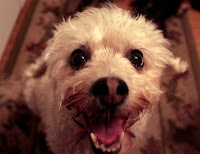 The photos I've taken in the last few days I've put in a slideshow at the bottom of this post for your enjoyment - you can also see them in my Google Photo album at http://picasaweb.google.ca/dogkisser/PhotosWeekOfAugust32009#

If you are ever stuck for something to do - there's a ton of photos of cute dogs to look at in my Google photo albums at http://picasaweb.google.ca/dogkisser