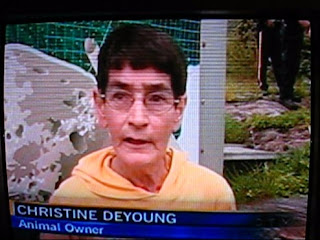 The NS SPCA were down in the district of the Municipality of Guysborough today seizing almost 90 animals from 2 ladies who said that they started out with 2 animals who just kept mating together and now they've ended up with almost 90.

On the news report the Chief Provincial Cruelty Officer said that they've been to the property before and the family have always refused help - which is very much unlike the case in the Valley where the woman who killed the kittens said that she was refused help for the kittens she drowned - even though on the news report tonight the woman said that "if you drown the cats they say that's illegal too" - like as if "you're damned if you do, and damned if you don't" - like it's illegal to hoard and it's illegal to kill them.

The SPCA at this point are saying that they are not going to lay charges - we all realize that hoarding is a medical illness and needs to be dealt with through the medical profession. I hope these ladies get the help that they need - but I don't know how they're going to get it if they aren't charged with something so that there is some follow-up by some governmental department. Otherwise the SPCA is going to be there again in 2 years seizing another 90 animals. Because hoarding - like any other medical condition - doesn't go away without treatment.

Maybe they can move their hoarding over to something inaminate though - like lighters and newspapers and matches, or dolls clothes. That would be much easier from an animal care point of view. Maybe someone should suggest that to them.

Probably Lloyd Hines is back home in the district of the Municipality of Guysborough - he should go have a visit to his constituents, see how he can help them - I wonder how his enlightened dog bylaws relate to this case - certainly doesn't seem to have had much effect.....

Below is tonights news coverage on CTV and CBC