Some cute stuff and some gooey stuff 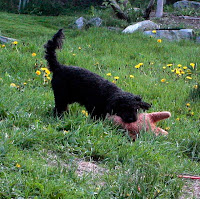 Shall I start with the cute stuff? Bobby is turning out to be a dog who can play by himself and love it.

But this little guy is coming in a pretty close second, I've got to say.

I was out mowing the lawn when he was doing this and he wasn't taking any notice of the lawn mower - he wasn't letting that dampen his mood at all. He was determined that he was going to have a good time. 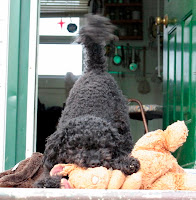 He should be pretty tired out tonight, because he did a lot of running around, that's for sure. 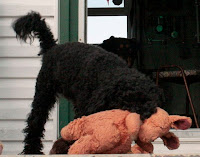 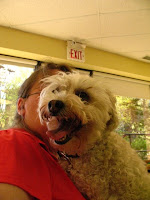 So now on to the gooey stuff - last night there seemed to be something "off" about Buttercup's left eye, but I couldn't quite figure out what it was. Today when I got home from work her left eye was just covered in yellow puss - it was totally gross - something was very wrong, so we went right over to the vet - I was worried that she has torn her cornea like Jack did last summer - and I didn't want that to happen to Buttercup - but Dr. Lindsay at Carnegy's did a stain test on her eye and there's no tear - so hopefully her eye is okay. I never like to screw with dog's eyes when something goes wrong. She's got antibiotic ointment and hopefully it'll just get better - whatever it is that went wrong. 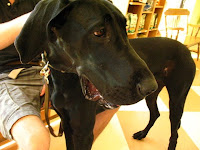 While we were at Carnegy's we met with big black great dane named Ruper - he was a very nice dog, only about a year old - and very large! Although I have yet to meet a small great dane - they always come in size large!
Posted by Joan Sinden at Friday, May 22, 2009