Advocates for Responsible Pet Ownership sent a short questionnaire to the 4 provincial political parties - the PC's, Liberals, NDP and Green Party. The Green Party have yet to answer back, and it seems like they won't because they haven't even acknowledged receiving the emails - but the other 3 parties have - and their answers are posted on the ARPO facebook group - or you can go read them here -

Their answers are pretty interesting. They are especially interesting when you taken into consideration WHO is running in some ridings, and also what happened during the last provincial election in 2006.

First we'll talk about WHO is running in which party here in Nova Scotia - and as a large breed dog lover - I would be very remiss to not note that the inestimable Lloyd Hines is running in the Guysborough Sheet Harbour riding - after having been the warden for the district of the Municipality of Guysborough for like the last kajillion years.

So what about the questionnaire answers from the Liberals was so interesting as it relates to Mr. Hines running as a liberal?

One of the questions that was asked was -

"Will your party push to have all municipalities enacting humane animal laws and require that BSL be rescinded in those municipalities that have enacted such legislation? (Breed specific legislation enacts punitive laws based on breed of dog rather then the actions of negligent owner’s regardless of breed or mix)"

And that question was asked on purpose - BECAUSE there ARE municipalities in this province that DO have BSL - the provincial government, working with the Municipal Government Act - could outlaw BSL on a municipal level if they wanted. They are the law - they can do whatever they want.

The PC Party said that "The Nova Scotia Society for the Prevention of Cruelty opposes the establishment of Municipal by-laws that declare recognized breeds of dogs vicious or dangerous." The questionnaire seems to have been answered by Rodney MacDonald himself, which is very impressive - and he goes on to say - "I think I'd be more supportive of legislation that addresses the causes of aggression rather
than targeting the banning of specific breeds. This position, I believe, supports that of the SPCA’s mission as well" - so they get an A+ for that answer I'd say.

The NDP said that "The NDP will work with the Union of Nova Scotia Municipalities to develop model humane by-laws. The NDP does not support breed-specific legislation."

One would think that they'd sort of HAVE to say that somewhere in their questionnaire - seeing as how in 2006 Darrell Dexter sent an answered questionnaire out to a reporter (which was eventually blamed on an aide to Dexter) saying "personally I support breed specific legislation" - you can imagine the brou haha this caused in the dog community. My post from 2006 is - here - if you want to read it. What a hoot that was.

So the NDP is really BEHOOVED to be against BSL this election, I'd say! haha!

So now on to the liberals, what was their answer to this question? Here we go -

Liberals feel that the rights of municipalities to make and enforce their own bylaws should be respected and do not see a role for the provincial government to lobby for changes at the municipal level. The Liberal party believes that it can be most effective protecting animals and safeguarding the rights of animal owners by introducing changes within its jurisdiction. An example of this was the changes to the Animal Protection Act our party put forward last fall.

So, if the Liberals get in - they are going to give full rein to the Municipalities to do whatever they want - like they tried to do with their "housekeeping bill" that tried to push through breed banning province wide last year by changing the Municipal Government Act completely - or like with Wardens like Lloyd Hines (who was also the President of the Union of Nova Scotia Municipalities who tried to push through that bill change of the Municipal Government Act) - who have enacted complete breed bans in their municipalities based on nothinng more than their own fear and hatred of certain breeds. 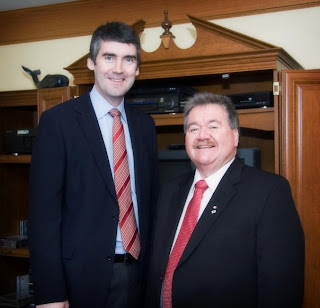 (from Lloyd Hines Facebook page - he's "red hot and ready to run")
And that person is now running for office in their own Party - so if he wins - he'll have a say and clout in their party decisions in the future. It is very well known that one of his dreams is to enact breed restrictions throughout the province of Nova Scotia - so what do you think is going to be on his mind if he is successfully elected to the provincial legislative assembly? I think that the topic of breed banning is going to come up at some point.

But with answers like these to simple questionnaires - I don't think there's much of a chance for the Liberal party.

Did you all know that Stephen McNeil is the brother of the HRM Police Department's Robin McNeil - the person who wrote the bylaw A300 we're currently living under? Makes sense to me.
Posted by Joan Sinden at Friday, May 22, 2009