So I got a new action alert from PETA today - all lovers of seals are now being called to boycott Canadian Maple syrup until the heinous Canadian seal hunt is stopped forever. And to advertise it PETA has a travelling show of a person dressed up as a baby seal going from town to town taking a hekapik to a very large cardboard representation of a bottle of Canadian Maple Syrup. Isn't that fun? 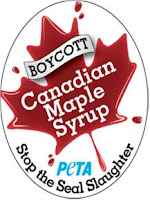 The email says that 85% of the world's maple syrup comes from Canada - that's a statistic I can get behind. That's fabulous to hear. Bravo for our Canadian Maple syrup producers! You know what I love? Maple syrup peanut brittle - now THAT is tasty. If you've never tried it, you should. It is yummy.

Getting that email got me to thinking a little bit. I remember getting an email about the Faroe Islands a few months ago. You remember that place? In Denmark? That has the pilot whale slaughter every year? That's considered an important part of the culture and history of the area - done since the 10th century? I know that because I looked it up on Wikipedia. I received the lovely photos in this blog post a few months ago - if you do a google search you'll find more.

I wondered if PETA was hollering from the roof tops about this slaughter the way they do about the bloody massacre Canada’s annual seal hunt - "the largest slaughter of marine mammals on Earth" - so I did a Google search of "Peta seal hunt" and came up with the page - "PETA.Org Help stop the Bloody Seal Massacre" - which has video, links to other PETA pages about the seal hunt, links to pages where you can buy merchandise, and the obligatory links to pages where you can send them money to help stop the seal hunt. It's one of more than 68,000 pages about PETA and the seal hunt.

When I typed in "PETA Faroe Islands" - I came up with a page - "Stop the Bloody Whale Massacre on the Faroe Islands" - and all it is - is an advocacy alert page that sends a letter to the Prime Minister of the Faroe Islands. Boy, that's scary - isn't it? That's going to quickly send a very sinister message around the world about the horrible massacre that's going on over there in Denmark.

I also have to say that at this point - and to me, it would seem obvious - as I am an animal lover, and anybody who reads this blog would also be an animal lover - that I love seals, my dogs love seals - I also love whales, and I love cows, and pigs, and chickens - and I love cats, and rats, and mice - I love every kind of animal.

I love harp seals, I love grey seal - but the thing is, the seal industry is an abattoir without walls. It's no different than the cow industry, or the chicken industry - or the dogs as food industry over in Asia.

But because it's done on pristine white ice - and photographers can get in close - and the organizations saying they are trying to shut it down know they can make a lot of money off the advertising of the killing - then you have the organizations of PETA and HSUS we have today. Very rich organizations. Targetted at places like my part of the world - and not at places that make them no money.

I'm not saying that the seal hunt is okay - it's as wrong as the cow killing industry is - it's all bad. Just like killing dogs for food is bad - they are ALL THE SAME. One is no worse than the other. Do you understand what I'm saying?

Organizations like PETA cannot cherry pick their money making ventures because of the cuteness of the meat, and easy access to the abbattoir.

That is the ridiculousness of what this situation shows.
Posted by Joan Sinden at Wednesday, May 27, 2009