Some good and some bad dog politics news

There's some good and some bad dog politics news to talk about - I'll start with the good first.

I read over on Reigning Cats and Dogs today that there is a fabulous article in today's Cape Breton Post article about the fact that the Cape Breton SPCA is finally - after years and years of people in the Nova Scotia humane community trying to get them to stop using it - that they are finally going to stop using their gas machine to kill cats. Up until now they've used a box and put several cats in at once, filled the box up with gas and the waited for the cats to die slowly. There's no other way to describe it - although proponents of the method will tell you differently. 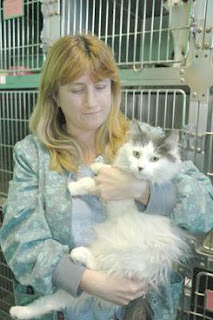 You can go read Janet's post - because she talks about it at great length and also quotes minutes from a February SPCA Provincial Board of Directors meeting minutes that are great where the management of the Cape Breton SPCA says that it's the first time they are feeling like they are starting to feel like they are actually being listened to and their feelings and needs are being taken into consideration - and it's also probably why they are being amenable to making positive changes at their shelter.

The Provincial Board really are doing great things all across the province in my opinion - and the results are starting to show in a palpable way. We can only hope that these great things continue.

Do you all remember Lloyd Hines? Warden for the municipality of the District of Guysborough and president of the Union of Nova Scotia of Municipalities? The man who has banned pit bulls and rottweillers in his own municipality and tried to pass breed restrictions throughout the whole province last year by inserting a section into a housekeeping bill into the Municipal Government Act?

Well - he has just made an announcement that he is running for the head of the liberal party in Nova Scotia and he wants to become PREMIER of our PROVINCE!!!!

Can you imagine? If he becomes premier of our province how soon do you think it would be before he introduced legislation so that we would become the next Ontario - or even worse?

This man is afraid of and HATES dogs - this man CANNOT become any more powerful in governmental politics than he already is.

Every dog owner in Nova Scotia has to know what he thinks about dogs and make their own decision about him before they vote for or against him - and that includes every member of the Liberal party - and decide whether or not he is an asset to their party.

And it behooves us as dog advocates to make that happen - sooner, rather than later. So it is time to get busy.

There is a great document called "Panic Policy Making: Canine Breed Bans in Canada and the United States" - and it's all about how politicians and bureaucrats have passed laws and policies based on fear and bluster and not on anything concrete or real - and Lloyd Hines is noted in particular starting on page 30 -

No violent dog attacks occurred in the 1990s in Guysborough County or Nova Scotia. No local event was even manufactured, although the threat of such an event was implied within the council. Instead, Warden Lloyd Hines of Guysborough became heavily involved in attempts to pass breed specific legislation in his community. He was a vocal proponent of bans, possibly due to his personal fear of large dogs
(confidential interviews). In 1995 he introduced a proposal to ban pit bulls, citing the need to prevent attacks like those in Ontario. He thus effectively constructed the danger (confidential interviews). Characterization There was no evidence of a contagious public fear of some dogs, no panic, and no emotional calls for a ban from local groups or the public. Virtually no media attention was given to the issue, there was no cascade of dangerous dog information in the press, no public hearings were held to detail any public fears, and no local opposition to the ban appeared. No other officials or groups voice proposals, and Hines did little to rationalize the reasons for his proposal in a public forum (confidential interviews). Alternatives and Choice The county of Guysborough quietly passed a breed specific ban covering Pit Bull Terriers, American Pit Bull Terriers, American Staffordshire Terriers, and any breeds mixed with these breeds.

The 1995 ban did not allow pit bull type breeds to live in the district. Because the media paid virtually no attention to this issue, most residents of Guysborough were unaware of the new law. Apparently without public support or, to the contrary, outrage, the county amended the by-law in 2004 to ban Rottweilers (the amendment contained a grandfather section to exempt Rottweilers already living in the county). The ban on Rottweilers was passed after the New Brunswick attack that led to the death of the four year old child. Warden Lloyd Hines was active in pushing for these bills, and he has been threatening to push a breed specific ban through the Union of Municipalities (confidential interviews). His aide, however, described the Hines proposal as a province-wide dangerous dog law rather than a breed ban. No one has been able to see a copy of the proposal (confidential interview). However, the Union of Nova Scotia Municipalities is currently compiling a report that is not yet available to the public (Goldberg 2007).

As well - Lloyd Hines is the man who said -

I wrote a post about that last June when the legislature was dealing with his horrible workings with bill 138 and "responsible dog ownership". He is just bad all around.


Here is the article from Friday's Chronicle Herald:

By DAVID JACKSON Provincial Reporter
Fri. Mar 13 - 5:33 AM
Liberals are looking to a couple of veteran municipal politicians to carry the banner in the next provincial election, The Chronicle Herald has learned.

Lloyd Hines, the warden for the Municipality of the District of Guysborough, said he felt the time is right for him to leave municipal politics for a shot at the provincial arena.

He’ll be seeking the Liberal nomination in Guysborough-Sheet Harbour at a March 21 meeting.

Mr. Hines, president of the Union of Nova Scotia Municipalities, said working with the other levels of government will help prepare him for the job if he gets elected.

In Halifax Regional Municipality, Coun. Jim Smith (Albro Lake-Harbourview) is said to be looking at running in Dartmouth North, but Mr. Smith wouldn’t confirm that.