Fun in the snow

We're having a little snowstorm here tonight, so the dogs decided they'd rather be out in the back yard rolling in freshly fallen snow than inside lolling on the living room floor for a couple minutes tonight.

Buttercup has been feeling pretty good lately - her back legs are working pretty good after having gone through 2 surgeries on her back left leg last year - I'm pretty amazed actually at how well she's walking currently - so she's been up for some back yard romps lately.

She's been doing quite a bit of toy playing in the back yard - I'd bet that buried in the snow in the back yard right now there's probably about 20 stuffed animals back there - she's very good at taking her toys outside, but very bad at bringing them back in! Luckily you can buy big bags of stuffed animals for $1.50 a bag at Frenchy's - and when a layer of snow melts to reveal some toys I'll take them in and put them in the washing machine.

This is Daisy with a toy freshly absconded from Buttercup, so she's pretty happy about that - I was not wanting to use the flash - so of course all my pictures came out blurry. A $2,500 camera and I still can't get a clear picture. Oh well....

Buttercup digging down to the permafrost for what? Only Dog knows.

Charlie patiently waiting for Daisy to swing back to the section of the yard that he's in so their wrestling can resume.

Here's a couple shots from Thursday's beauty parlour session - this is a long shot of Jack and his stylist Jenny - they've got an entourage watching the beauty emerging moment by moment. 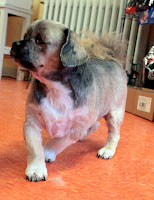 This is a shot of the after effects - I think Jack was pretty much strutting. He likes it when he looks good - who wouldn't, when you've spent a good chunk of your life looking very very bad.

This is Rocky, a 2 year old brown newfoundland dog. I've never met a brown newfoundland dog before - has anyone else heard of one? He was quite beautiful - he was in for a self-wash because I guess he had quite a big shit patch - probably his shit patch was as big as all of Jackie (Jackie gets shit patches too) - he's about 150 pounds his owner said. Could it be because Rocky lives outside? I know I've met other outside dogs who've had red on the outside of their hair - bleached from the sun, but I've never met a dog who's hair has been a completely different colour from being outside. Maybe there is a type of newfoundland that comes in brown. he was nice looking though.
Posted by Joan Sinden at Saturday, January 31, 2009