Great news - Elvis has been adopted! 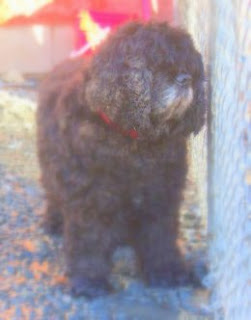 I just got an email from a friend of mine - Janet, the lady who does the super website the "Nova Scotia Homeless Pets Project" - had word that Elvis - the senior cocker spaniel, who I understand was one of the original Celtic Pets dogs - has been adopted!

He's been looking for a home for so long - since February - and someone has finally found their perfect pet in him. Janet has had him in her homeless pet website and on her blog - and in my newsletter that I put out last week - I highlighted him too. In my write up I said he's been "been waiting for – very patiently until YOU’VE come along." I also said - "he’s had a very hard knock life and deserves a soft bed in a warm home that understands that his ears need special attention and his
eyes are sore, and he just wants to live out his days with the amazing unconditional love that he should have been getting his whole life". Which is true. I hope it made a difference for him. He looks like he just wants to be able to lay down and REST. That doesn't sound like it's too much to ask for from someone out there, does it?

And I'm so glad that he's found it. Good for Elvis - and good for the people willing to give it to him.
Posted by Joan Sinden at Thursday, October 16, 2008