An article about my newsletter in the Community Herald today!

Pat Lee interviewed me last week for the Community Herald section of the Chronicle Herald - and it was published today. She interviewed me for the newsletter I've been sending out - and specifically the questionnaire I sent out to the HRM Regional Council Candidates that I published last weekend - Pat did a good job on the interview I think - I wish I would have done a good job in the photo! The dogs looked good though. Thanks Pat!! 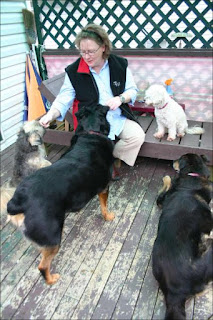 Pet activist Joan Sinden hangs out with her four adopted pooches Jack, Daisy, Charlie and Buttercup at her Spryfield home. Sinden, a regular blogger on animal rights issues, sent a questionnaire to all municipal candidates to get their views on pet-related issues before the election.


SPRYFIELD — An animal rights advocate wants to know where wannabe councillors stand when it comes to the rights of pets and their owners.

Joan Sinden, a longtime blogger on pet politics and the antics of her own pets, has drawn up a questionnaire and sent it to all 59 candidates in the upcoming municipal election, wanting to know their thoughts on everything from off-leash policies to their stance on Bylaw A-300 (responsible pet ownership).

"I want to give dog owners some insight into what the candidates think about different dog issues, and they can go to the polls with some knowledge of what those running in their neighbourhood think about companion animal issues," she said.

Sinden, who has four dogs adopted from shelters or rescue groups and a cat, has often written about her opposition to the bylaw, particularly the section that deals with dogs accused of being dangerous and the city’s ability to seize them.

"And if they take your dog, they can kill it with no recourse," she said.

The city is also still reviewing its off-leash parks pilot project and has not revealed changes to come, if any, after a series of public meetings earlier in the year.

Sinden will reveal the results of her questionnaire in her recently launched newsletter called Dog Watch Nova Scotia (found at dogkisser.blogspot.com).

A companion to her Me and My Dogs blog, the newsletter keeps track of ongoing court cases — such as the Celtic Pets case in Cape Breton, or that of Gail Benoit and partner Dana Bailey of the Digby area who are accused of selling dying puppies.

It also contains other pet-related news she feels is being overlooked by conventional media outlets.

"Things were happening that the media wasn’t covering, and that was annoying me," she said. "So I wanted to have a vehicle where I could get things out to people that I thought were important."

Sinden said there needs to be more attention paid to puppy mills and dog brokers in order to educate the public about the dangers of buying animals from these sources.

"It struck me that there’s got to be some way to get this information out to people if the media isn’t covering the story," said Sinden, who lives in Spryfield.

For a number of years, Sinden has also maintained a website called Charlie Loves Halifax ( www.charlieloveshalifax.ca), named after one of her dogs, which offers information on pet-friendly places and services in the Halifax area.