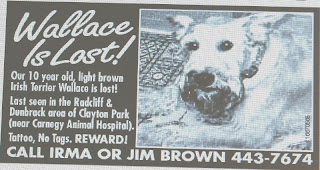 This ad was in the Chronicle Herals on Thursday - and emails are now circulating because he is still lost - he slipped his collar while going into Carnegy Animal Hospital and ran away out in Clayton Park.

The owners are an elderly couple who are totally devoted to Wallace and miss him very much. There was an ad in the Herald on Thursday. He has been spotted several times since he escaped but disappeared again.

10 year old, light brown Irish Terrier last seen in the Radcliffe & Dunbrack area of Clayton Park (near CarnegyAnimalHospital) on August 18. He slipped his collar off while entering the vet. clinic so has no tags. He does have a tattoo. There is a reward offered. If you find this dog or know where he is please call Irma or Jim Brown at 443-7674.