I went and checked out the HKC's 250th Show today! 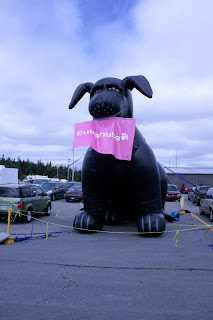 So I went today and spent about 2 hours at the Halifax Kennel Club's 250th dog show today going on out at the Exhibition Park on the Bay Road. 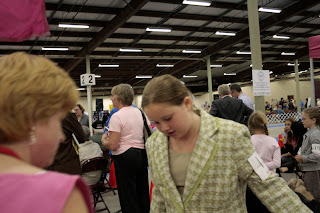 When I got home I realized I had taken a bunch of really stupid photos of all the wrong stuff - once again - I've really got to start getting on the ball about what kinds of pictures I take - I didn't take any pictures of what was going on in the show ring - although there wasn't a lot of that going on while I was there unfortunately. 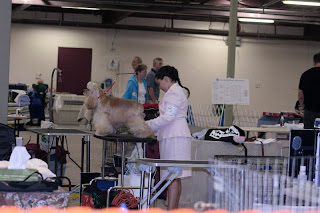 There was a junior handling group going on - or the end of it, and I was in there in-between obedience matches, which was too bad - but there were tons of vendors there this year - and 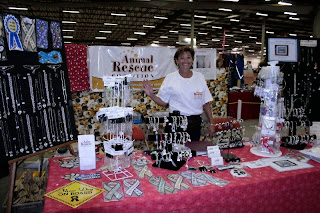 I of course spent egregious amounts of money - but anything over $40 is too much I think - and I definitely passed that margin - I made the Animal Rescue Coaltions table happy anyway! haha! I took photos of her booth in February 2007 - and she had some pretty good stuff then too! 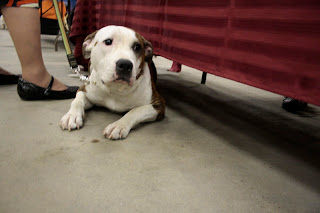 This is one of Cathy Prothro's - of the Dog Legislation Council of Canada's dogs. 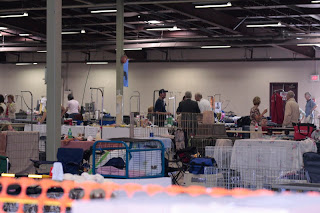 This is a shot of the floor where the owners and handlers prep their dogs for the show ring - it's pretty interesting to walk through there - and if you're thinking about adding a dog to your life - it's really good to go to a show and walk through a spot like that and look at the dogs - and the people there would willingly give tons of information about the breed's that they're pretty much dedicated their entire lives to. 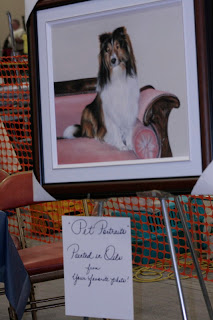 I saw some new vendors I hadn't seen before - and this was one of them - her name was Arlene Collins - and she is a self taught artist from near Parrsboro - her stuff was really neat - she's got a website at http://arlenecollins.com/

Another interesting table I was at - and an example of my bad photo taking - because I didn't take a photo of their table! - was a company called "Fine Dine Your Canine" - and they make the raised dog feeders with the water and food bowls - and they also personalize them for you - put your dogs' names on them - which I thought was really neat - and also the price seems a lot more reasonable than other places I've seen - their website is at http://finedineyourcanine.com/ 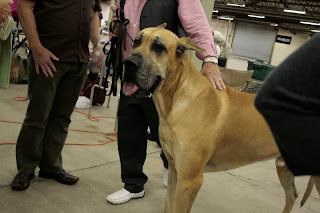 This is a picture of a great dane at the show today who I also took a photo of at the HKC show in February! I've been going to the shows now for a couple years - so I'm starting to recognize some of the dogs from year to year. 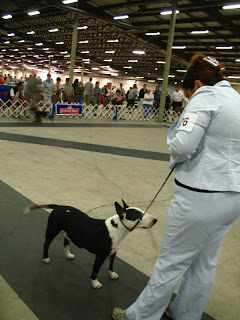 And it was the September, 2006 HKC show that Oreo Chernin made her one and only fabulous showing in the ring - never to be forgotten. 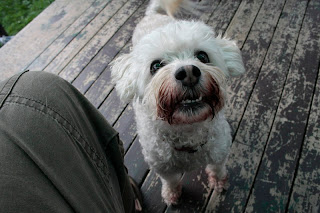 One thing I bought that I've been wanting to buy for a long time is a grooming table mounting thing - so I can now hang Buttercup when I'm grooming her! She'll be so happy about that, I'm sure! haha! This was her when I got home - she wasn't too happy that I spent most of a Saturday without her, that's for sure!
Posted by Joan Sinden at Saturday, August 30, 2008

Email ThisBlogThis!Share to TwitterShare to FacebookShare to Pinterest
Labels: Halifax Kennel Club, Past Dog Events, shopping, stuff to do coming up