The True Story of Jack The Dog

Well I gues the NS SPCA has called my bluff. For some unknown reason - as one of the reason's that they're booting me out of the NS SPCA - they've said "Further you have in your possession a dog from a recent SPCA seizure which you gained unlawfully, without the foster forms being signed, placing the SPCA in a compromising situation".

The dog they are talking about is the little dog Jack who first appeared on this blog on February 11, 2008. And I can assure you that he was legally obtained by me - and that I also currently own him legally. 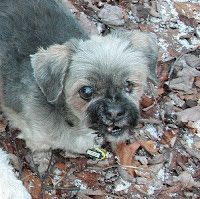 And yes - he is one of the dogs from the Celtic Pets fiasco - and maybe that's why I have been so vocal about the NS SPCA since that time. Why when the days kept going by - and I knew that the dogs from the seizure were continuing to languish in cages over at the shelter - 52, 53, 54, 55, 56 day - I was asking the question - what is happening to those dogs - why are they still in cages, how is this any different than what was happening down in Cape Breton except for the fact that except for being in clean cages - they're still in cages? Why haven't they gone out to foster - which I've heard that they now have, thankfully.

It was because of Jack that I was asking these questions. Jack was from Alice MacIsaac's house - not the seizure from Zonda MacIsaac's property. Jack came from Animal Rescue Coalition - he went up to Port Hawksbury last summer to be adopted by Alice MacIsaac because he had proved himself to be almost unadoptable - he had been in foster care since 2005 and had been adopted out 3 times and returned - so when Alice agreed to take him it seemed like a good idea - after all, she was highly regarded in the rescue community and a special constable - who wouldn't give a dog to someone like that? So up he went.

No adoption papers were signed - he just went up there and stayed there until the day of the seizure and the SPCA transported him back down to Metro. The morning after the seizure - Animal Rescue Coalitions took ownership of him again and picked him up at the Metro Shelter - and he immediatlely went to a foster home. Because of his stalwart personality, that foster home didn't work out - and on February 11th - he came to live with me - and he's been here ever since. And on the 7th of March 2008 I legally adopted Jack from the Animal Rescue Coalition. So he is legally a piece of my property - just as much mine as the computer keyboard that I'm typing out this post on - bought and paid for. Gained lawfully from the Animal Rescue Coalition. Just because the NS SPCA has written that on my dismissal letter does NOT make it true.

And for the life of me, I can't figure out why they'd actually write that. Didn't they know that when they did that, I'd come here and tell his story? Up until now I've kept the whole thing private - but now you all know that Jack is a Celtic Pets dog. And it's because of the letter that I received from the NS SPCA. I wouldn't have said anything otherwise.

And let me tell you - I've had to fight to keep him here - you want to talk about personality conflicts? Pam Keddy has threatened to send her cruelty officers to my house to take away Jack - just so that he can sit in the Metro Shelter in a cage, rather than be happy in my house. How's that for loving animals. Back when I wrote my post about "dirty dirty politics" - that's what I was writing about - her threatening to take away Jack and stick him in a cage. Now THAT is dirty. Thank dog it didn't happen, instead she just kicked me off of everything she could - ie the Yahoo group and rescue association "Maritime Animal Rescue" that she owns. No big whup.

She said on yesterday's news - as I posted in the post - that "dog people are passionate" - dog people in POWER are certainly something, that's for sure!! That's why I've always stayed only a dog owner - I wouldn't want to become anything that power gives you. It's not pretty.

At least I get to spend lots of time with my great dogs - Charlie, Daisy, Buttercup, and JACK.
Posted by Joan Sinden at Thursday, April 17, 2008