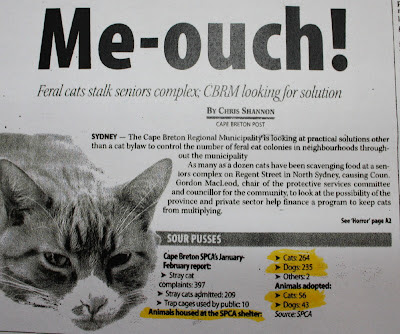 There was an article in the Cape Breton Post on Friday about feral cats in Sydney - and part of the article posted how many animals went INTO the Cape Breton SPCA in January and February, and also how many animals made their way OUT OF the SPCA ALIVE - and the numbers are staggering - 499 animals went into the shelter and only 99 animals were adopted out. If you do the math - thats a 75% kill rate. How can that be happening in today's society anywhere in Nova Scotia. How can anyone within the NS SPCA be allowing that to happen? And at the same time - they only have SIX animals listed on their Petfinder site - how is THAT possible?

Disgusting, as far as I'm concerned. And I've had a disgusting day today from beginning to end - I have completely lost faith in any part of the NS SPCA - including in the people who think they are going to be able to fix it - they are just as corrupt and full of lies as the current regime. It's all bad - from beginning to end. It just goes to show you that all politics is corrupt. Power corrupts - and absolute power absolutely corrupts. Pathetic.
Posted by Joan Sinden at Monday, March 10, 2008