New Bed for Charlie and New Magazine for the City

Yesterday I went to the Metro Dog Wash looking for a new dog bed for Charlie, having a couple blankets on the floor just don't seem to be doing the trick for him anymore, so I wanted to buy something really soft and cushy for him. I had previously tried one of those huge donut beds for him that had the high sides on it that cost like $180 and he wouldn't get in it for some reason so I had to give it away because it took up half the living room floor - but while I was on my search I noticed that a new magazine that was supposed to be coming out anytime has arrived in stores.

It's called "Furry's Halifax" and it's free and it's local. I'm not sure how often it's going to be pubished - but it's available at all the local pet stores and is the initiative of one lady - Lynne Mackay - who has moved here in the last couple years.

There's an article in there by my good friend Adina MacKay who has a dog walking business and an inhome obedience business called "Adina's K-9 Coaching" - so that's a very good sign as far as I'm concerned!

I finally found the perfect bed out at Global Pets in Bayer's Lake - it was originally $99.99 and it was marked down to $79.99 - they had thinner ones for $39.99 and I was going to buy 2 of them and put one on top of the other - but luckily Caitlin who works there found this one. 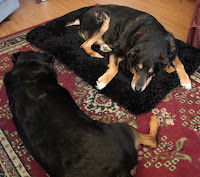 Charlie laid down on it immediately after I got home - he's so good about stuff like that - he always would rather lay down on a blanket rather than laying down on just the carpet or bare floor. He's such a good boy - here Daisy is waiting her turn to lay on the bed. 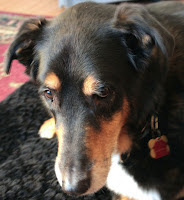 I thought this was a cute close-up - it's like Charlie is saying - get that camera out of my face!
Posted by Joan Sinden at Saturday, December 22, 2007

Email ThisBlogThis!Share to TwitterShare to FacebookShare to Pinterest
Labels: charlie, photos, shopping, stuff to do coming up