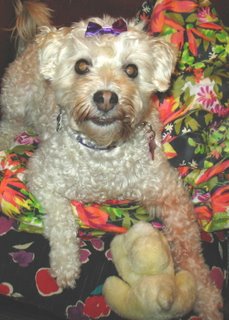 First off, is this not the CUTEST thing you've ever seen in your life? This dog takes the cake in cuteness. She really does. She blows me away every day in how beautiful she is. What a gift. I got this little hair bow thing when I had Teddy at the vet today at Carnegy's - they had them on the counter for $.90 each. How could I say no? I wish I could've gotten ones that would've fit Daisy - now THAT would've been something that would've made the world a much more beautiful place, that's for sure! haha! 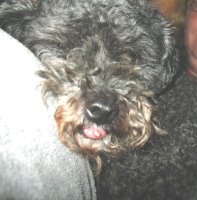 I don't know - do you think the prozac has already started to take effect? (see below for explanation!)

But for now he's on Metacam - which is a liquid analgesic - which he'll probably be on now for the rest of his life since we've found out he's got arthritis, but the biggest thing we did today was we decided to try him on clomipamine - doggy prozac. We're going to see if that improves his biting at all. It's worth a kick in the can anyway. I'm interested to see if it has any effect. I've always said that everyone should prozac - so why shouldn't that also include dogs too? haha! 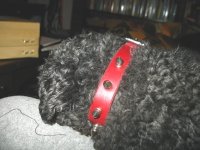 We went out after his vet appointment and went to the Metro Dog Wash and bought him a pretty new dog collar - seen here - as a treat since he was such a good boy at the vet! You might ask why I didn't just buy him a dog collar at Carnegy's since they have such a huge selection there at their gift store? It's because that store IS NOT dog friendly - and I of course will not give any of my hard earned money to a store that won't let me go in there with my dog. So I left that place after spending $281 on my vet bill, drove 15 minutes - and went to a place that is smart enough to let me shop with my canine life companion and bought him a fancy new collar! And everyone was happy! Teddy included - because we got to stay together longer! 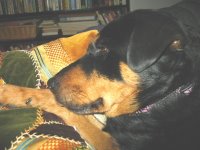 A couple of pictures of Daisy tonight feeling very langerous! 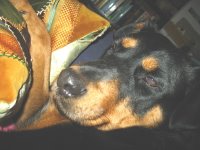