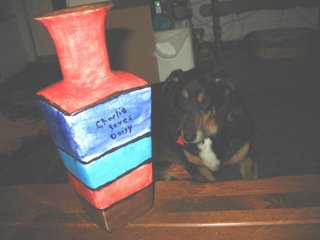 A couple days before Christmas my sister and I - and Buttercup - went to the Clay Cafe on Quinpool Road in Halifax to spend time together but I also wanted to go there for another reason. The last couple animals I've gotten back from the crematoriam after they've died have come back in urns from the Clay Cafe and I thought - wouldn't it be neat to make urns for the animals while they're still alive and make them how I want them and have a dog with me while I'm making them?

The Clay Cafe is a dog friendly establishment - so I took Buttercup with me, and I made a vase that I'm going to turn into an urn for Charlie and Daisy. It has 4 sides and one side says "Charlie loves Daisy", one side says "Daisy loves Charlie", one side says "Together forever", and the last side says "Friends forever". Maybe if it's big enough it'll fit all of us! I'll have to see about that one though!

Another neat dog friendly idea I had was while I was in the shower this morning I had a huge brain wave. On my "Charlie loves Halifax" website I have a page called "Tips for owners of dog friendly stores" and I talk about if dogs have an accident in their store that they could have a bucket all set up to just hand to the customer so that they can clean up the mess and if they are a responsible dog owner they'll WANT to clean up the mess themselves anyway. I also talk about the fact that there are specific cleaners out there that clean up the enzymes in dog pee so that it completely erases the smell of pee so that another dog coming along won't want to cover up the smell of the previous dogs pee and therefore cause another accident. So my brainwave is to actually provide these buckets filled with stuff to stores that want to be dog-friendly. It could include a sticker for stores to put in their window indicating that that they're dog-friendly, cleaning products that are specifically for dog pee, disposable towels that are good for cleaning up messes, and the bucket could say provided by "Charlie loves Halifax".

I think it would be a great thing for moving dog friendly Halifax forward. Does anyone have any suggestions on what would be good things to put in the bucket? I'm open to anything!
Posted by Joan Sinden at Friday, December 29, 2006