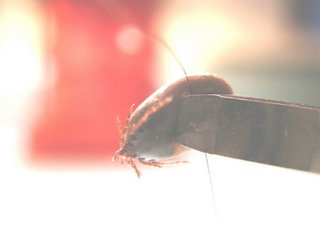 I found another tick on Charlie tonight. I wonder why I keep finding ticks on poor Charlie and not the other dogs? Is it because he's got a nice thick coat for them to dig right into and snuggle into? He's the only double coated dog in the crew. This one was ensconced very happily underneath his collar.

The last suggestion I had to remove the tick failed miserably (that being to stick it with a hot needle so that I pissed him off enough so that he pulled out his head and I could get him out with tweezers. What actually happened was that when I stuck him with the needle his guts spurted out and I killed him instantly and his head stayed firmly underneath Charlie's skin and Charlie got a nice big bump where the tick had been) - so this time I tried the next suggestion on the list - which was to rub salt on the tick. And guess what? IT WORKED! EXCELSIOR! I tugged on the tick with the tweezers - and he came out head and all! So SALT is the panacea for ticks. I am going to rub salt on ticks from now on.

The picture above is one I took directly after extracting the little bastard from Charlie's neck - the hair attached to the tweezer is one of poor Charlie's. Witness that there is no blood in the tick - so he hadn't had a chance yet to start sucking - so I'm assuming that he became attached to my canine soul mate in our failed quest to reach Colpitt Lake. So the little blood suckers are also in Spryfield.

Another note about insecticides - I typed Revolution+Advantage+Sentinel into Google and I came up with http://www.hometownanimalcare.com/online_meds.html which told me about those 3 drugs - which was interesting because in the comments to my earlier post about ticks Revolution was posited as a replacement for Advantage because it's also topical. I see in that website that Revolution also protects against Heartworm - which we don't have yet in Nova Scotia.

But this website talks about a topical drug called "Frontline" - that kills fleas and ticks. I'm going to ask my vet about that and see if I can get some of that - because we really don't need the heartworm protection yet - thank dog.
Posted by Joan Sinden at Sunday, November 05, 2006