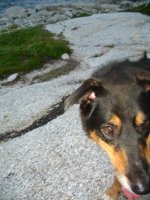 We went to Prospect Bay this week one night - Blogger has been acting up so pictures have been hard to upload. I think it might've been Thursday night we went. It was good and windy when we went - which is the best weather for going to a place with huge rocks right next to the ocean - big white surfy waves coming in are so spectacular. There was absolutely no buoy booty to be found anywhere along the shore though. Those fan-damned fishermen are taking too good of care to their possessions I guess! Oh well, it won't stop me hunting for them though. 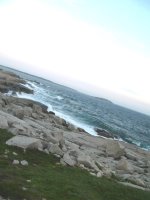 You get to Prospect Bay by taking highway 333 - as if you're going out to Peggy's Cove - but when you're about 1/2 way to Peggy's Cove you'll come upon a sign that says "Prospect Bay" - and you'll turn left and go down a road that has a dead end - at the end of which is Prospect Bay - at the end you've gone too far! Just before you get to the village there's a little side road - Cove Road - turn right there and park near the end of that road - and go straight down the path. And then you can walk along the rocks for a long time. Be aware that there's a ton of ticks at Prospect Bay though - so check everyone over when you get home though
Posted by Joan Sinden at Sunday, August 13, 2006