Our First Barbecue Ever 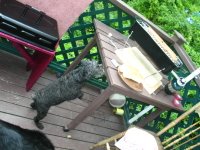 Not being the heaviest of meat eaters I've never really seen the need to own a barbecue - but this week Canadian Tire (who's Quinpool Street location is dog friendly) had table top barbecue's on for 1/2 price - so how could I say no? So I went out and bought one for $13 and came home and set it up. I completely freaked out the kid who was restocking the hot dogs section when I confessed to him that I had never before in my life bought hot dogs and did he have any suggestions. He actually had an opinion on every brand on the shelf! He still had braces on his teeth and I'd say he was in about his second year of university - so I'd say he was qualified to give an opinion - he was giving me cost AND taste comparisons! haha! So I bought a package that was mid taste and price for me and the dogs and headed home.

Teddy was the funniest. I'd say he has lived around a barbecue before. He immiediately got up on 2 legs and started sniffing. Daisy was interested - but she's interested in all things food. Charlie and Buttercup just patientely waited on their blanket. And I was amazed I blow the thing up and melt all the siding off the house. So I predict some zucchini burgers are in our future now. 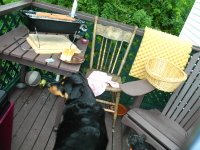 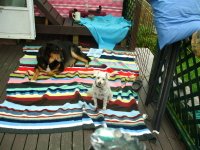