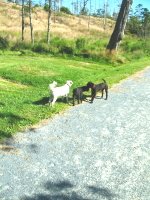 On Saturday mornings I like to pretend that I'm the owner of a small dog family. When it's nice out me and the small dogs go down and walk along the shore at Point Pleasant Park - before 10am dogs are allowed along the Shore Road at the park, and a lot of people partake of that privilege, especially on nice days on the weekend. So I put Teddy and Buttercup in the car and we go down and Buttercup barks and chases after all the dogs and everyone thinks it's cuter than hell. Which it is.

I can just enjoy the dogs and the morning and my coffee - and life is good, and it's sunny, and I can think about what I'm going to do today, and if a dog comes toward us all it's going to do is want to play - not attack, right? 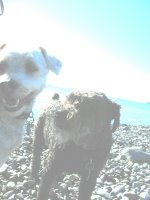