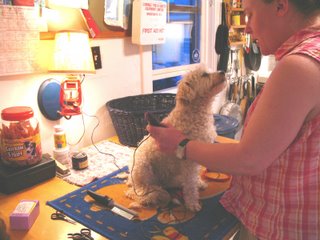 It's gotten me to thinking about having big dogs versus little dogs. I've got both and when I just had big dogs I thought that once they went I'd only have little dogs - and I'd DEFINITELY never get any more dogs that SHED.

I'd certainly never trade one moment with Buttercup for anything. She's the best thing that's ever happened to me - a true soulmate who has taught me so much about the fact all animals are sentients beings and that not only humans deserve to be treated with deference and respect - it's amazing. But at the same time she's absolutely incorrigible, and from a dog's perspective she's been absolutely untrainable. I've completely given up. I've found small dogs completely impossible to train.

Big dogs are easy to train - for some reason I can train big dogs. They listen to you. They want to please you. "Nothing in life is free" programs actually work with them. Consequences actually work with them. With small dogs nothing works. And they can get away with everything because everything they do is cute - even the bad stuff. When Buttercup attacks another dog everyone thinks that's cute as hell. When Teddy is attacking me my parents think that's sweet. But if Daisy actually tried any of that she'd be dead within a couple of hours just because of the way she looks.

Also - grooming is a HUGE hassle. I have never given Charlie a bath. He is 8 years old this year. That may sound gross, but he is clean and shiny and I brush him all the time and he smells good - most of the time he smells like lilacs - just like his sister Leonard does. Dogs that shed - and double coated dogs - don't need the same coat care that dogs that don't shed. Buttercup's hair gets greasy and dirty and she starts turning brown if I don't bathe her. And she HATES getting baths. She refuses to be treated like a froo froo. She spent part of the day today underneath my sewing table trying to escape my scissors. And Teddy? He has to be drugged and muzzled in order to get his hair cut. Enough said!

So big versus small - shedding versus non-shedding.... it's not as clear cut as you may think. Also - there's the whole spooning business. Charlie is a beautiful spooner. And back when it was just me, Charlie and Leonard it used to be a race to the bed to see who was going to get my belly to see who I was going to spoon and who was going to get my back. There is NOTHING in this world better than being the filling in a dog sandwich. I tell you what! You can't do that with tea cup poodles!
Posted by Joan Sinden at Sunday, June 18, 2006