We've been in the Newspaper! 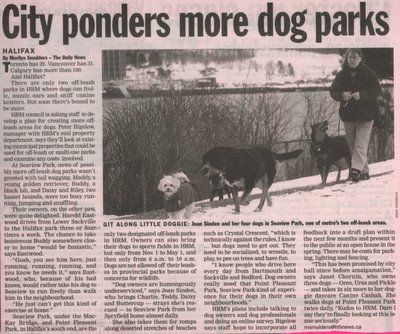 And it wasn't a nasty letter to the editor this time - it was about the proposed (and hoped for) new dog parks that are going to be talked about by the HRM's city council. I was interviewed last week by the Halifax Daily News. I don't have a subscription to the newspaper so I couldn't get an electronic copy of the article so I had to scan in the paper version of the article. If anyone reads this subscribes to the Daily News and will send me the electronic version, I'd love to have it. Sometimes it seems like me and Janet Chernine are the only 2 dog owners in the city according to the Halifax newspapers when they're looking for quotes - although I am NOT complaining! haha! But Buttercup even made it into the newspaper anonymously in May 2004 when we were at Seaview one day and a photographer was taking pictures - I guess it was because she really IS the most beautiful dog in the world! The picture is - here - in a pdf file if you dare to look at it!
Posted by Joan Sinden at Sunday, February 05, 2006

Email ThisBlogThis!Share to TwitterShare to FacebookShare to Pinterest
Labels: letters to Editor, Seaview