Continuing in My Christmas Day Groove 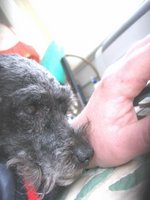 Do you know how hard it is to type when you've got a 10 pound poodle growling at you because you keep moving your fingers and disturbing his sleep? Let me tell you, it's not easy. Anyway, I'll get it figured out eventually - I'll probably get carpal tunnel in my left hand from having a poodle's head glued to it the whole time I'm on the computer, but that's not what this post is about.

I've been continuing to think about what is important in life, and what is being alone, really - and what is happiness - especially from a Buddhist perspective - which is what I am. I turn 40 this year (2006) - so it's really time to drop the bullshit and do something I think.

This past week there was a Barbara Walters special on the tv you might have seen and it was called "What is Heaven" and it had several different faith's and people's ideas of what and where Heaven is and where we go when we die. Buddhism is a little bit different (or my interpretation of it anyway) in that it's a secular philosophy rather than a religion and there's no God figure - it does talk about after you die in that they believe you're born time after time through reincarnation - but as for heaven and hell - that's happening right here - created by you and your karma. And no it's not created solely and completely by Tara Bayne's dog - although I think that there are a lot of doggie vibrations locally caused by him! So heaven and hell is right here right now - depending on how you look at it and react to things happening - not that anything changes - but it's just you that changes.

It's funny that the mythical Shangri-la would be in a place like Tibet isn't it? A place that supposed to be a lush, beautiful jungle like place where everything is pristine and beautiful and colourful and people live peacefully forever and everyone is beautiful and everything is absolutely perfect. Tibet is supposed to be a rocky, craggy, snow covered place where it's so hard to survive because it's winter there all the time - how can these 2 things be in the same place? I think they are in the same place because of the people who live there - Shangri-la and Tibet are one and the same thing - it is through the eyes of the people living there that Shangri-la exists. And because of that I think that Shangri-la can exist anywhere - it can even exist in Spryfield if I want it to.

That's what I want 2006 to be about - dropping away the bullshit and getting back to the meat and potatoes. I hope I haven't gotten too airey fairey for you. The glass is neither half full or half empty - the glass doesn't even half water in it - it is all just an illusion. It all exists, for sure - but it's just a perception. It just is.

And that is why dogs are so important - they just are too. I thought Teddy was a poodle - but he now looks like a schnauzer. I am completely fucked up about it now. What do you think? He was given to me as a purebred toy poodle. 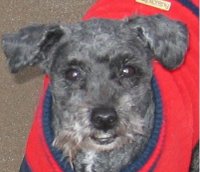 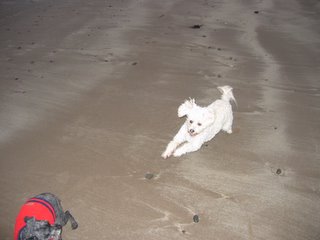