Christmas Day I think - whether you're religious or not - is a time to sit down, look around you and take note of the blessings (if you want to call them that)in your life.

I am so lucky to have the dogs I have - sometimes it's hard to convince myself of that fact when I'm cleaning up my latest bite, or walking them at 10 o'clock at night because of the fact that Daisy can't be around other dogs off leash - but life would be so empty without them. So I'd like to thank Maureen Tate for having the faith to give me Teddy and believing that I'd be a good home for him. I'd like to thank Zonda MacIsaac who runs Celtic Pets for letting me adopt Daisy in 2004 after having fostered her for 6 months - for her realizing the depth of Charlie and Daisy's love for each other and knowing that that really was the reason why she couldn't go anywhere else - and also the fact that I'd move heaven and earth to give her a normal life after her having such a shitty start to life. And I'd like to thank Tara Bayne for showing me Buttercup who was back in the observation area of the SPCA's cages in August of 2003 - I took her home that day to foster and she's been with me ever since. I can't breathe without her. And then there's Charlie who I've had the longest - since February of 1999 when he was 3 1/2 months old - also an SPCA dog. My once in a lifetime perfect dog - if I would've stopped with him people would've thought I was the most amazingly talented dog owner and trainer of dogs because he is so absolutely perfect. Too bad I kept going and took in impossibly broken dogs instead and continue to look like a complete idiot on a daily basis. At least Charlie has stayed pretty much perfect.

So as I sit here writing this - perhaps the world is collapsing, but right in front of me laying on both my arms is Teddy - who wants nothing more than to be in those arms 24 hours a day, and will bite to show his disapproval when he's not. But directly to my left is the most perfect example of a soulmate dog who looks at me like in this picture where I'm giving her head a scratch, and licks my bites like in the next photo - making everything better.

So what more can anyone ask for? I guess I'm not really alone on Christmas day - this is what my house looks like today - with a new replacement vacuum cleaner that I went to Walmart at 4pm yesterday to pick up because I threw a piece of my old one in the garbage on Thursday night - and you absolutely cannot be without a vacuum cleaner when you have 4 dogs and 3 cats! Even when one of those dogs has been shaved bald.

So we're soon going to be heading to the beach for an extended romp - hopefully there won't be too many people there so Daisy can have a lot of running too. I'm going to try and get a coat on Teddy so he doesn't freeze to death. I'm interested to see how long it'll take me to get the coat OFF him at the end of the day. 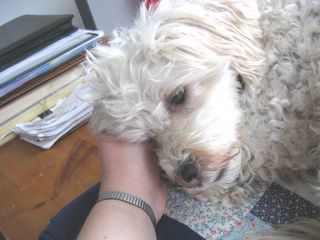 Buttercup getting a scratch 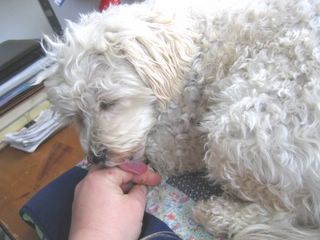 Buttercup having a lick of Teddy's latest wound infliction 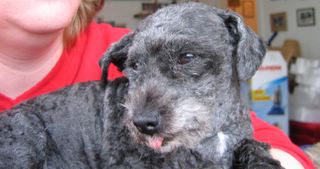 Teddy in my arms this morning 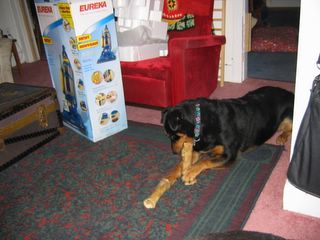 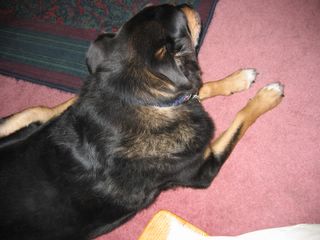 Charlie is the most patient dog in the world 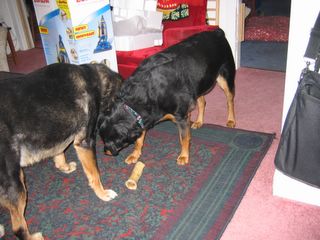 Daisy and Charlie having a bit of a wrestle0