One Year Anniversary of Home Ownership!

I moved into my little house one year ago June 1st - I had to buy a house because the building my apartment was in had been sold and they had evicted all the tenants because they were gutting all the units and turning it into a rooming house for university students - and thereby probably quadrupling how much money they were going to be taking in every month in rent. There was no way I was going to find another place that would let me have FOUR dogs and THREE cats so I was forced into buying a house - probably the best thing I ever did.

I haven't had hardly any time since I've bought the house to do anything with it - but today I fixed up a little garden that is at the front of the house. It had a wooden fence around it that had fallen apart so I put up a brick facade which I think looks really cute.

The back yard has to be seen to be believed. There are TWO cars BURIED in the back yard. I am NOT kidding you. It's going to take me years to get it cleaned up. The back yard is huge - the lot is 50' x 200' and most of it is trees and rocks - but there's a huge section off to the site (not in any of the pictures below) that is just a big pile of garbage and brush that has the cars, garbage, and God knows what else. I'm slowly picking at it - but you wouldn't believe all the stuff that's there. Literally 100's of liquor bottles. Someone had fun in my house in the past.

Anyway - a couple pictures of my new little garden out front and the row of plants on the "good" side of my back yard! 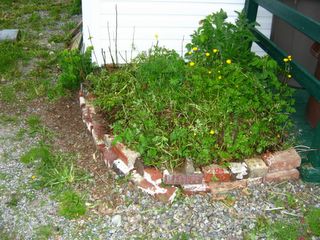 One giant leap for the front of the house... 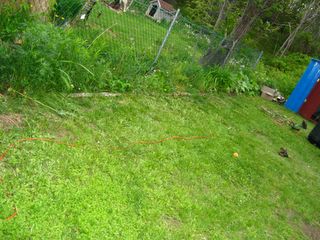 And the back of the house is mowed, whipper-snipped and slightly less jungle like for a few days too!