I was sitting in my chair tonight when Daisy quiety tries to walk past me with something in her mouth. And I knew immediately exactly what it was. It was a piece of cat shit. She likes to take pieces of cat shit out of the litter box into the room next to where I was sitting and pick the litter off of them before she eats them - I know that because I find kitty litter on the floor of the room next to where I happened to be sitting tonight.

So I stopped Daisy from proceeding into that room and I said to her - "Daisy - drop it! Drop it, Daisy!" That is a reasonable command to give a reasonable dog - any one of any of all my other dogs that I've had would have dropped that piece of cat shit like it would've been on fire at that point simply because I had given them the command to drop it. Hell - I'm sure Charlie was thinking about going and getting something just so that he could bring it over and drop it for me just to make me happy! But not Daisy.

Daisy is the hungriest dog that you'll ever meet in your life. I have to keep a collar on her at all times that will absolutely not pull off over her head - a metal choke collar works best but they are so inhumane that I'm ashamed to keep it on her so I've found a martingale works just as well. I need that because if she finds something to eat outside - and it could be something that's deadly poison and will kill her on contact but she thinks she can eat it - absolutely nothing will keep her from it. That's what happens when you've been starved. And Daisy has been left to starve to death in the past. And unfortunately she's never forgotten it. So she's always hungry.

So do you know what she did with that piece of cat shit that she going into the other room to pick the kitty litter off of so that she could eat it? She looked me in the eyes, rolled her tongue around it and swallowed it whole. And I went - DAISY! THAT'S GROSS! And she very calmly took 2 steps and jumped up on the couch.

Needless to say there will be several things that she'll need her mouth to touch before she gets any kisses from me tonight! See below for pictures of a very self-satisfied rottie mix... 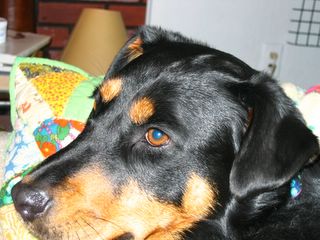 Nothing going on in my belly... 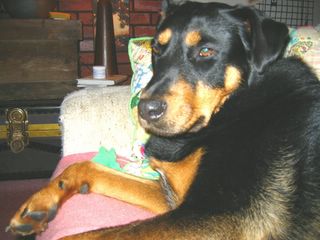 Man, I'm feeling a bit gravelly for some reason.