Me and the Dogs are going on a Road Trip! 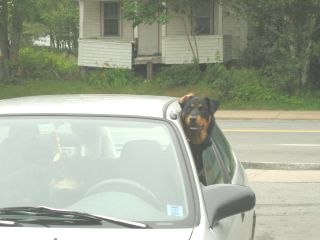 On Tuesday me and the dogs are driving from Halifax up to Toronto. A couple months ago I contacted the ex-husband to see if his life was in a place where he might like to take Leonard back. Leonard was originally his dog - and he said that he thought it was - so we're driving up to deliver her to him. She's a super high strung dog and I'm pretty sure that putting her on a plane would kill her. And it's a good excuse to take a vacation.

She's never seemed to adapt very well to all the dogs coming and going that I've fostered and when Philip left a couple months ago it was like that was the last straw - she's just been implacably unhappy since then. She always stays by herself and won't come out and play with us in the living room at all. She just seems desperately lonely like as if she wants to have her own person that she doesn't have to share at all. And she has always seemed as if she's never gotten over missing the husband. That's someting that me and my animal communicator friend have always agreed on. It's like she's always looking for him. Waiting. And yet he never comes. So she's had this inconsolable sadness about her. So now he's agreed to take her back and hopefully she can be happy again. I've just had this shang-ri-la vision for her of them in a dog park in Ontario of him throwing the chuck-it for her and her running blissfully after the ball. Because that's all she's ever cared about. Him, and balls. And now she'll have both. It'll be sweet if that is actually what she's been waiting for all these years.

So we're going to go up and I'll drop Leonard off and then have a vacation - I'm calling it a road trip to see how many places we can be bad in. We're just going to drive around for 2 weeks and see what's going on everywhere. I'm really interested to see what people's reactions are to the dogs in different places and if they're different than here in Halifax. Especially since BSL's been passed in Ontario - I'm pretty sure that we're going to get a lot of hassle in Ontario. I'm taking a video camera with me so it's all going to be video-taped.

So there won't be any posts for 2 weeks starting on Tuesday April 19th - and if you live in Ontario watch out for a silver Honda Civic Hatchback with Nova Scotia licence plates that's got a couple black dogs and a froo froo barking like crazy. You should probably stay away because I'll be totally lost and most likely in the wrong lane!