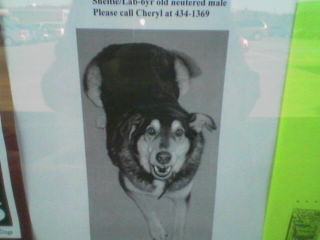 They say that only 20% of dogs die in the homes they go to as puppies. There were 12 puppies in the litter that Charlie and Leonard were born with. I'd say that their back yard bred litter are pretty much following the statistics perfectly.

My friend Tara saw the above ad in the window at the Companion Animal Hospital this past Saturday over in Cole Harbour. At the top it reads "six year old sheltie/lab mix neutered male free to good home. Please call Cheryl at 434-1369. It is undoubtably a litter mate of Charlie, Leonard, Philip, Conrad, and Solie's. And I'd be willing to bet money that his name is Zorro. I met him once with his owner's down at Point Pleasant Park - they said they lived in Cole Harbour and they took him most often to Bisset Park. He looked exactly like Leonard in the face and he was in between Leonard and Charlie in size. He was like Leonard in temperament - jumpy and skittish. So that will make Charlie, Solie, Philip, Zorro, their mother, an unknown female who were with Charlie and Solie - 50% at least - of the dogs have gone through the rescue system at least once so far. And Leonard's been bounced back and forth between "Mom and Dad" - and she's going back to "Dad" tomorrow - which is where she belongs, actually.

So if you're looking for a nice dog - you should call Cheryl at 434-1369 - if you go get him I'll give you a really nice dog quilt and some yummy liver when I get back from Toronto - and you'll also get a nice built in dog-family because I'd already consider him a member of my family and I'd love to stay in touch!
Posted by Joan Sinden at Monday, April 18, 2005