It's other dog owners who hurt the dog cause the most 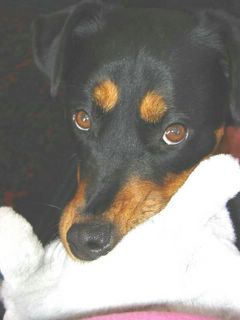 Daisy is not an easy dog to own. That is for sure. She is a dominant dog and I'm always being called to task for her behaviour - but she is by no means a dangerous dog. One of the problems with the city I live in and am continually fighting against is the fact that other dog owners have no capacity for normal dog-dog interaction and sometimes it makes me literally sick to my stomach. Tonight I was called the reason why dog owners are given a bad reputation. I just looked at the guy. I wanted to say to him - "you have no idea". 2 minutes earlier he had just attempted to punch Daisy while he was dangling his basselope by the neck 2 feet in the air because Daisy had done her nightly Seaview duty of running up to them at full speed talking to them at full blast like only Daisy can. Quite typical dog park behaviour actually. It just happened to be coming out of a 70 pound black and tan dog. It was also coming out of a 15 pound terri-poo right behind her but no one seemed to mind that. (Buttercup).

If the current trends continue it won't matter - the pinheads of the world will win and dogs like Daisy - dogs that look like Daisy anyway - won't exist anymore. The Sue Sternberg world will win out and only dogs under 35 pounds will be born. Anything else will be banned - so the behaviours will still all exist, but the nastiness and scariness of the size of the dogs will be gone. Won't that be a lovely world? No rotties, no pit bulls, then no german shepherds, saint bernards, collies, bouviers, labrador retrievers, or anything else over 35 pounds. Nothing scary to run up to your little dogs that make you want to punch them and tell their owners that they are what is ruining the world and making it bad for everyone.

It makes me fucking sick. I'd like to refer once again to some wonderful dog park guidelines that I've referred to before - one is from Waterloo Ontario - a leash free park called "Dogerloo" that talks about just what happened tonight specifically if Mr Pinhead happens to come upon this - which I'm sure he won't - unless my best friend Carla once again clues in and finds who he is and tells him who I am - but that page is at http://www.dogerloo.com/guidelines.htm and then there's also the pamphlet I made up specifically for Seaview based on the Goodpooch.com's wonderful website which is at http://dogkisser.blogspot.com/2004/06/pamphlet-i-made-for-seaview-park.html